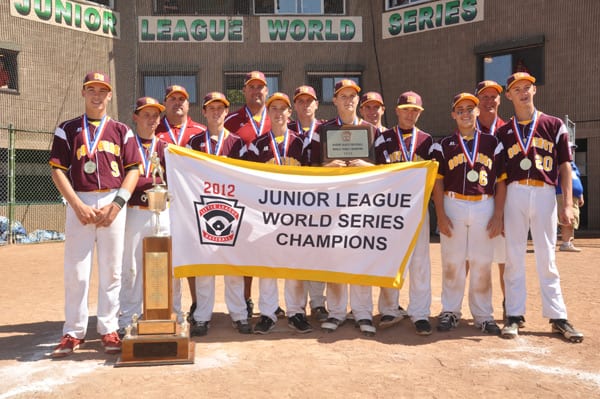 TAYLOR – The boys from Rockledge, Fla., used their hitting prowess to go undefeated in the Junior League World Series, but won the championship game Aug. 18 on a balk and a walk.

The USA Southeast champs scored two runs in the bottom of the eighth inning to break a 10-10 tie and defeat Oranjestad, Aruba, 12-10, in one of the wildest and highest-scoring finales in JLWS history.

The win in the title game was anything but easy at Heritage Park, site of the week-long World Series for all-star teams of 13- and 14-year-old players for the 32nd straight year.

Florida led 9-4 after 5½ innings and appeared to have the momentum when the Latin America champions from Aruba clawed back into it with four runs in the bottom of the sixth.

After Rockledge scored one more in the top of the seventh to build a two-run cushion, Aruba came back one more time with two runs to force extra innings.

In the top of the eighth, with runners on first and third, one out and Florida’s Blake Beyel at the plate, Aruba relief pitcher Edmar Tromp was called for a balk, which allowed both runners to advance and scored Trevor Payne with the go-ahead run.

Aruba, which had been able to rally throughout the game, was unable to stage a final comeback.

One key to the victory for Rockledge was two home runs by Mason Studstill, who set JLWS records with six home runs, 14 runs batted in and 12 runs scored. He also hit a team-high .571.

Even when Aruba rallied from a five-run deficit, Studstill said his team never feared the worst.

“We always can hit so I knew we were always going to stay in the game,” Studstill said. “We did good.”

“These kids have a lot of heart and a lot of desire,” Florida manager David Clanton said. “They love to win and they love to hit. They never give up. They just keep swinging away.”

Aruba outhit Florida, 14-12. Ryan Odubar was 4-for-5, scored twice and knocked in a run to set the pace for Aruba. Jeandrick Odubar had two hits and knocked in three runs. Edmar Tromp and Endry Brito had two RBI each. Albert Pop had two hits.

Tromp led Aruba with a .560 average in the series. All 14 of his hits were singles.

Beyel was the winning pitcher after holding the Latin America champs hitless over the last inning and a third. Tromp suffered the loss.

Aruba manager Allan Pourier and coach Glenda Thomasia were with another group of Oranjestad boys when Aruba finished second to Scottsdale, Ariz., in 2009. Pourier said some calls by the umpires hurt Aruba’s chances and cost his team the game.

“These guys played with heart today,” he said. “They put all of their heart into the game. I felt a good feeling in the sixth inning and seventh inning – that the momentum had shifted to us. Everything could have been different, but that’s the beauty of baseball. It could be decided by all things.”

Pourier called Florida “a great hitting team. I love how they play. They play hard. We gave them a big test. They had to work to get a championship.”

He also said he loved his team.

“I spent three months with them and we were close together,” he said. “I know them personally. I know how they feel. That’s why it hurts me at this time. It hurts in my heart. It was a tough loss, but still I am proud of them.”

The championship game was second-highest run-scoring finale in JLWS history – and the highest since 14-year-olds were included in the tournament in 1999. Only Thousand Oaks, Calif’s., 20-3 win over Ohio in the 1994 world championship game resulted in more total runs.

Rockledge, which defeated Corpus Christi, Texas, 11-5, for the USA championship the night before, finished the World Series 6-0. The Florida state champions were 22-0 since the start of post-season all-star games.

Two of the coaches and six of the players went an amazing 49-0 from the time the season started.

Joining Aruba and Mexico in the International Pool were Asia-Pacific regional champion Tainan City, Chinese Taipei; Lazio, Italy, the champions of Europe, the Middle East and Africa; and the Canadian national champions from Calgary, Alberta.

Rockledge was the second straight team from Florida to win the World Series. Palma Ceia/Bayshore from Tampa won the series in 2011 and players and coaches from last year’s champs urged Rockledge to keep the world title in Florida.

Rockledge was the 10th Florida team to play in the World Series and the fourth team from the Sunshine State to win the world championship. Palma Ceia/Bayshore also won in 2004. A team from the Belmont Heights league in Tampa won in 1982, the second year of the tournament. That team featured future Major League players Gary Sheffield and Derek Bell.

Clanton said it felt like his players were a team of destiny. In the World Series, they came from behind repeatedly.

“We had a heck of a season,” he said. “It just felt right this year. The kids all pulled together and played together.

“It was a great ride. We enjoyed every single minute of it.”