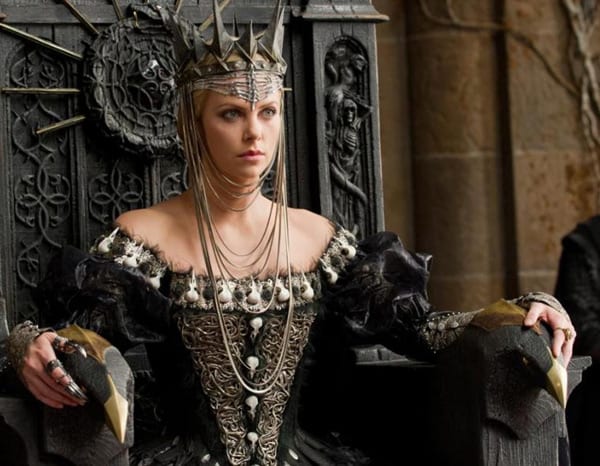 Charlize Theron in “Snow White and the Huntsman”

PICKS OF THE WEEK
“Snow White and the Huntsman” (PG-13) — This is the Snow White adaptation that looks like it swallowed a whole piece of “Lord of the Rings” and leftover bits of “Batman Begins.” It’s bleak, stylish and as gritty as PG-13 will allow. The soul-sucking queen, Ravenna (Charlize Theron), sends out a huntsman (Chris Hemsworth) to bring back the heart of the recently escaped Snow White (Kristen Stewart). The hunter instead sides with the girl, and they start training for armed rebellion.

This broodier, dark Snow White leans heavily on CG spectacles and large-scale battles. This is a shrewd move by the director, since it seems easier to coax a good performance from a flock of animated ravens than it is to get a non-perplexed expression to grace Kristen Stewart’s unemotive face.

“What to Expect When You’re Expecting” (PG-13) — It’s got a lot of faces audiences are used to seeing, and too few things that we aren’t used to seeing. This rom-com is built like a broad overview of pregnancy and the various pregnancy-related issues that attractive people may encounter. The jokes are on the safe side and may cause deja vu in audience members who have seen any sitcom in the past 20 years.

Storylines include Cameron Diaz as a “Dancing With the Stars” contestant with an unplanned pregnancy, Jennifer Lopez as a woman looking to adopt, and Elizabeth Banks as a pregnancy guru whose own childbearing experience is turning out to be exceptionally difficult. We also get a bit of the men’s side of things, when we’re introduced to “The Dudes,” a comedic cast of new fathers sharing the unvarnished truth of dadhood.

“Where Do We Go Now?” (PG-13) — In a remote village somewhere in Lebanon, the townsfolk are equally divided between Christian and Muslim. People can get along for a time, but violence is quick to erupt. This quirky, confusing, sad comedy has the women of the town secretly collaborating to keep their sons and husbands from killing each other. It’s an interesting look at the age-old human struggles inherent in today’s news, even if it comes up a bit shallow.

“We Have a Pope” — In a room full of nervous old men who could not leave until a new pope was chosen, Cardinal Melville was chosen, against all of his hopes. No matter how much he doesn’t want it, the honor cannot be taken back and cannot be refused. Recognizing some mental anguish in the eyes of their pontiff, the Vatican hires a nonreligious therapist to help the new pope cope. This touching character drama/comedy looks at life through the eyes of a faithful man who never wanted to speak for God.