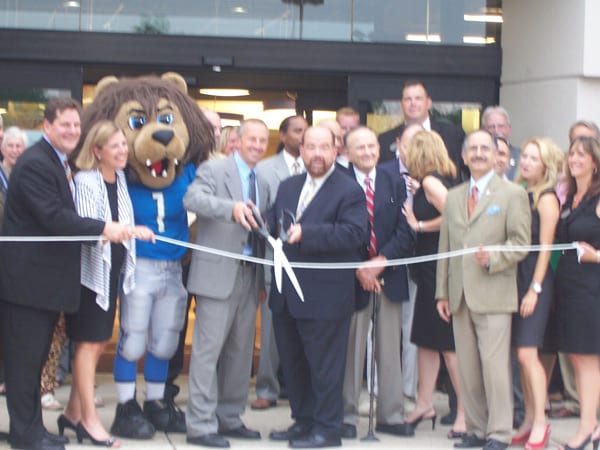 Those images are of real people who work for Goodwill Industries of Greater Detroit; people who Jeffrey Ukrainec, director of donated goods for Goodwill Industries of Greater Detroit, said were the driving force behind the employment training programs that helped them. These same employees in turn have helped build the nonprofit store’s success in Dearborn, 22451 Michigan Ave., and at their location in Canton, 41937 Ford Road.

On Sept. 5 Goodwill’s Dearborn location hosted a ribbon-cutting ceremony. About 50 people attended, including the Detroit Lions’ Mascot Roary. Ukrainec, who spoke during the event, said the store’s opening is a huge milestone.

“Tonight we have created a business that has created jobs- 20 jobs in the region with more to come,” Ukrainec said to a cheering crowd. “The people who have the jobs here all play a part in helping Goodwill’s programs get people jobs and get them where they need to be.”

Ukrainec said the best news is that all the revenue the store receives stays in southeast Michigan.

“That is truly unbelievable,” Ukrainec said. “That is a mision that no other resale store can claim.”

Ukrainec added that donations and store purchases are needed to keep the store going strong.

President and CEO of Goodwill Industries of Greater Detroit Lorna G. Utley also said during the event that for more than 90 years Goodwill has trained individuals who have barriers to employment and helped them get jobs.

“(They) get the opportunity to make their lives successful,” Utley said.

Goodwill, located at the former Inca Computer store which sat empty for 15 years, was scheduled to celebrate their grand opening Sept. 8.

During a meeting in January, the commissioners voted 3-2 for the move. Five “yes” votes were needed for the store to move forward.

In February, the vote was tied 4-4, in March, Goodwill asked the commission to table the item until enough commissioners are present to vote and in April the commission approved the store; later in the month the Zoning Board of Appeals granted the store’s final approval.

Some commissioners questioned if the store would maintain a neat appearance once they opened and not attract thieves who might rummage through the donation drop-box area after hours. Another concern was if the store would devalue nearby properties and that it is zoned Business C (General Business District) and Business D (Downtown Business District), classed in the same category as a strip club, which enforces a buffer zone between schools and residences. There is another buffer zone needed for other secondhand stores in close proximity.

Goodwill employee Robert Hunter said his life has been positively impacted by working with Goodwill.

“I love working at the store,” Hunter, who works the Goodwill trucks and processing center, said. “As (the company’s) been growing I have grown with the company.”

Hunter, who was unemployed for several years before working with Goodwill, said the store gave him an opportunity to work.

“I am a people person and it has been great,” he said.

For more information on Goodwill go to www.goodwilldetroit.org or www.facebook.com/GoodwillDetroit.