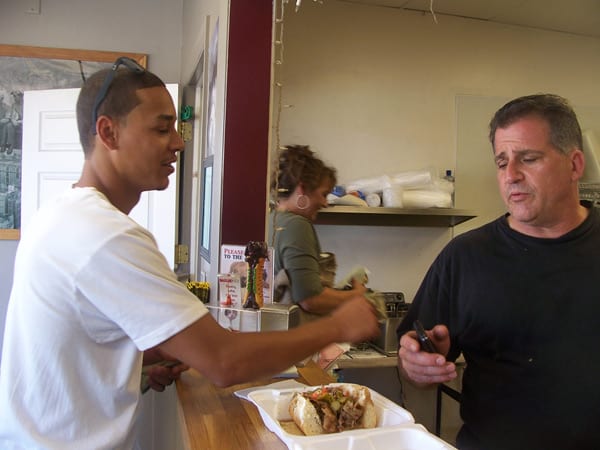 By SHERRI KOLADE
Times-Herald Newspapers
DEARBORN — Customers who visit businesses on Carlysle at Pelham and Outer Drive will be subject to road construction a bit longer.

Although the businesses situated behind the orange construction barrels and bulldozers since April are open for business, a few have suffered a loss in profits because the streets — from Telegraph to Outer Drive — are under repair until the end of October.

What’s Up Dawg?, 19327 Carlysle, is one of several businesses to lose profits because of the construction and co-owners Gino and Linda Maisano want to remind people that their business and others are still open to the public.

“This is a neighborhood where people don’t venture to as much,” Linda Maisano said. “We are trying the best we can to let people know to use the back alley for all of our business. (They) can use the rear entrance. We want everyone to know we are all accessible by the alley off of Pelham.”

Construction company T.R. Pieprzyak is fixing the potholed, damaged roads in the area and installing a new water main. Company representatives did not return phone calls by press time.

Dearborn Project Engineer Soud El-Jamaly said the construction company works on roads based on how well the weather cooperates.

“If it rains in September or October we don’t know,” El-Jamaly said. “The city is trying to help them and hopefully — weather permitting — it should be done by the end of October. We are making progress.”

El-Jamaly said about 75 percent or more of the concrete is done in the roads. Twenty-five percent of the roads need concrete, he said.

Gino Maisano calculated that their business is about 30 percent down since the construction started. He said the deli is short roughly $150 a day, or about $750 a week or about $18,000 since April.

“There is no accessibility,” Gino Maisano said. “Saturdays used to be a good day for us but Saturdays is when (the construction workers) do a lot of work.”

Customers could park in front of the deli and at other establishments on the Outer Drive strip before the construction. Now they park wherever they can find a free spot, Gino Maisano said.

“It is an inconvenience when they can just go into the Subway restaurant (nearby) because there is no construction and lots of parking,” he said. “Parking is always an issue here in Dearborn. And after construction we’re just hoping for nice free-flowing business again.”

El-Jamaly said because the roads are older the city needed to have them replaced and put a new water system in.

Mobile Gas Station, 19309 Carlysle, is situated next to the deli, and gas station owner Bassam Bazzi said parking has been a major problem for his business.

“It has been definitely more difficult because it is harder for people to get in and out of the station,” Bazzi said. “A lot of our customers are avoiding the whole street for the most part. But it has become a big inconvenience for them. We want it over as soon as possible.”

Salon Mimi co-owner Nancy Reyes said the construction — from a financial aspect — has not affected her business at 20007 Carlysle.

But with parking and debris, her business has felt the sting of construction.

“All we have is the parking in front of our salon,” Reyes said. “So the (customers) are finding parking (elsewhere) and they are walking through all the mud and dirt and they are bringing it in. We are lucky that it didn’t rain a lot.”

Reyes said she hopes when the construction is over her business’ parking lot will go back to normal.

Linda Maisano said that the construction workers have been very positive and they have contributed to her business, but she is looking forward to the finished product.

“Carlysle was pretty bad,” Linda Maisano said. “This has been a big hinderance. We’ve been here for two years and this is our hometown and when we see this and we start suffering it is rough.”