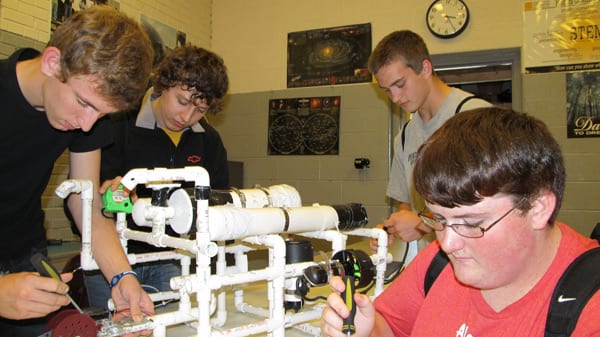 Photo by Sue Suchyta
Melvindale High School seniors Nick Kean (left), John Felt, Andrew Barron and Brandon Foster make adjustments to their partially disassembled underwater remotely operated vehicle. The group placed eighth out of 44 teams and took third place in a mission competition category at an international ROV competition June 20 to 24 in Orlando, Fla. The team was invited by National Geographic to bring their ROV to explore shipwrecks in Lake Huron near Alpena Oct. 4 to 6 at the Thunder Bay National Marine Sanctuary.

They plan to let their aquatic robot take the plunge instead.

In addition to shipwreck exploration with their ROV, the team will make introductory and informational presentations to Alpena Community College and Alpena High School students.

The team took first place at both the Michigan competition in March and the Midwest Great Lake Regional competition April 28 (as juniors) to qualify for the international ROV Marine Advanced Technology Education center competition held June 20 to 24 in Orlando.

At the international ROV MATE center competition the team emerged eighth out of 44 teams, with a third place finish in the mission competition category.

To prepare for the shipwreck exploration, the team is adapting their ROV to enable it to collect visual data on the target shipwrecks, both outside and inside the hull, and to retrieve shipwreck-related artifacts.

“I think it would be a unique experience to go look at the shipwrecks, to have an opportunity to do something that is unheard of (for a high school ROV team),” Thomas said.

When the team designs and mounts new equipment on their ROV, they need to test it in a swimming pool to adjust the buoyancy, so the team’s pilot or driver can adjust the ROV’s up and down motion. Four small thruster motors help drive the ROV as well. PVC pipes, PVC sealant and duct tape are used to construct ROV buoyancy tanks.

“We help them, they help us,” said 17-year-old Melvindale senior Alex O’Connor, who is a member of another ROV team at the school. “It’s kind of like a ‘learn together’ thing.”

O’Connor added that the ROV teams practice in a controlled pool environment where it is easy to make modifications to the ROV and conditions do not vary as much as they would in a natural outdoor body of water.

The Aquacards Inc. ROV team meets on Saturdays as a club, since the members have taken every class that Thomas offers. They also meet before and after school, and during their lunch period.

When Thomas saw ROVs in the National Geographic special “The Titanic” 10 years ago, he contacted the ROV expert, who taught him and 14 other teachers water robotics at a facility in Scottsdale, Ariz.

When arriving at Melvindale High School four years ago, Thomas established an ROV club, then classes the following school year. He now has 128 students in general ROV classes, and 36 students in advanced ROV classes.

Thomas works on Saturday with students who have “run out” of his classes to take or who want to avoid conflicts with other student activities.

He said he normally has five or 10 students on Saturdays at the beginning of the year, and then as the student teams prepare for competition, they work with their ROVs to simulate competition tasks that could occur in the real world, such as retrieving ducks contaminated by an oil spill and moving them to a “safe” zone, capping (or sealing) a well, or performing forensic body identification and retrieval tasks underwater.

ROVs may also sample water quality, or take samples to test for contaminants.

For the upcoming shipwreck exploration, the ROV can get into tight locations inaccessible to divers, and can withstand depth pressure more readily than human divers.

Thomas said that the students in his program are very self-driven.

“We push STEM education to the max,” he said, referring to an educational “Science Technology Engineering Mathematics” emphasis. He said his classes allow students to go from a “chalk and talk” environment to a hands-on learning experience.

Thomas noted that the school receives funding for the programs from the Square One Educational Network, which encourages student programs to get away from textbooks and into a hands-on environment.

They are also one of 15 nationwide High School Enterprise schools with a unique project supported by Michigan Technological University; their unique project is the water robotics (ROV) applications.

Many of his students see the ROV teams and other projects, like a solar vehicle program and innovative vehicle design program, as steps leading to engineering careers.

Dylan Modrak, a 17-year-old senior, would like to join a branch of the military that uses ROVs.

Senior Alex O’Connor, 17, who likes working on the ROV electronics, hopes to pursue a college degree in electrical engineering, with emphasis on underwater studies.

Barron, who likes to fix things around the house and “mess with gadgets,” is attracted to innovative mechanical and electrical engineering designs. He has taken some summer engineering classes, and has worked on a school solar car project in addition to the ROV team.

“General engineering is my big thing,” Barron said. “It was just really cool figuring out how everything worked.”

He sees unlimited applications for ROVs, including water studies and surveying.

He added that team members working on ROVs need to practice time management skills, since a lot of trial and error is involved.

Kean said he hopes his ROV team experiences will strengthen his resume’ when he applies to engineering schools.

Foster, said he’s always liked engineering and building things, and felt the ROV classes were a fun career pathway for him.

Sarah Preist, a 15-year-old sophomore, is new to the program this year. She said she is a hands-on person, and the way the ROVs move underwater and the thruster motos sparked her interest.

Thomas hopes to form an all-girl ROV team this year for the first time. He said he has encouraged the school counselors to enroll more girls in his classes this year. Previous ROV teams have comprised only of boys.

Thomas has already seen the learning that occurs in the hands on environment.

“They are learning and preparing themselves for the future,” Thomas said. “It’s opened up a number of doors for them.”

He added that the ROV teams have been great ambassadors for their school.

He added that the program has had a “chain effect” at the school.

“It’s a great opportunity,” Thomas said. “They’re doing a great job representing the school district and what education is about.”