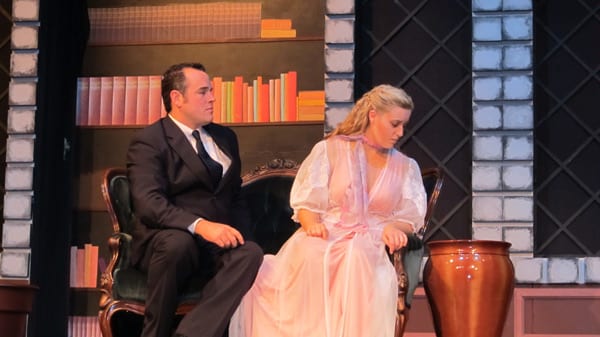 Dearborn residents Ken Kilgore (left) and Sydnee Rider play Harker and Lucy, respectively, in “Dracula,” the opening show of the Players Guild of Dearborn’s 85th season. The show runs Sept. 16, 21 to 23, and 28 to 30, with 8 p.m. Friday and Saturday shows and 2:30 p.m. Sunday matinees. The theater is at 21730 Madison, southwest of the intersection of Monroe and Outer Drive in Dearborn. For more information, call 313-561-TKTS or go to www.playersguildofdearborn.org.

By SUE SUCHYTA
The Players Guild of Dearborn opened its 85th season Friday with Hamilton Deane and John L. Balderson’s, “Dracula,” a stage play based on the Bram Stoker novel. The show opened on Broadway in 1927, the year the Guild put on its first show.

The play captured the students’ attention, and if their screams were any indication, scared as them as well.

“Dracula” will continue its run at the Guild theater Sept. 16, 21 to 23, and 28 to 30, with 8 p.m. Friday and Saturday shows and 2:30 p.m. Sunday matinees. The theater is at 21730 Madison, southwest of the intersection of Monroe and Outer Drive in Dearborn. For more information, call 313-561-TKTS or go to www.playersguildofdearborn.org.

The play, which runs for two hours with two intermissions, is fast-paced and captivating.

Bruce’s set is beautiful and versatile, especially the Act II set and the closing scene. It is a pity that some of the furniture – notably the desks – are shabby by comparison. However, the scratched furniture doesn’t detract from the fine performances.

Aric Liljegren of Dearborn is brilliant as Renfield, as asylum patient – his performance is mesmerizing, captivating and scary. His expressions are amazing, his accent never falters, and he brings out the best in his fellow actors during his scenes.

Tom Varitek of Dearborn is frightening and believably scary as Count Dracula.

Mike Moseley of Allen Park turns in a strong performance as well as Van Helsing.

Jeff Flannery of Southgate is strong in his support role as Dr. Seward. Ken Kilgore, as Harker, is also a strong supporting player, who only occasionally slips from an upper class British accent into the lower class Cockney accent patrons enjoyed during his performance last year as a police sergeant in “See How They Run.”

Kimberly Elliott of Canton Township, as the maid, has a fascinating scene when she falls under Dracula’s influence as he attempts to hypnotize her.

Others in the cast include Sydnee Rider as Lucy and Michael Bollman as an asylum attendant.

While the costumes are suitable for each character, they are not historically true to the late 1920s, which is significant because the show opened on Broadway the same year the Guild presented its first show; and director Bruce set the show in 1927 as well.

Many of the outfits are from the ’40s era, and some of the men’s suits and shoes appear to be contemporary. This does not, however, detract from the storyline or diminish the suspense of the thriller.

The props chair deserves praise for the vampire-fighting arsenal. The lighting and sound designers and crew outdid themselves with special lighting and sound effects, producing haunting sounds, remarkable flying bat appearances, and other eerie and frightening special effects. Some of the best special effects remain for the audience to discover – mentioning them would lessen their element of surprise.

Quinn, a graduate of Divine Child High School, appeared in the Chicago cast of “Wicked” from 2007 to 2009, and from 2009 to the present in the cast of the second national tour.

She is the daughter of Loni Lane and Joseph Padesky, and the granddaughter of Noretta Dunworth.

She grew up dancing at the Noretta Dunworth School of Dance, founded by her grandmother. Her mother is the current director. Both still teach dance.

Her parents, grandmother and brother Cory Padesky were in New York City for her first Broadway performance.

“What an amazing night,” Lane said Wednesday. “(We are) so proud of Casey (in) her Broadway debut. She was spectacular.”