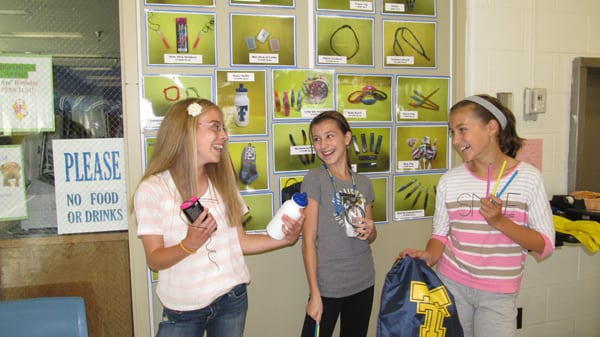 Photo by Sue Suchyta
Trenton residents and Arthurs Middle School seventh-graders Annie Wilson (left), 11; Elizabeth Wilding, 12; and Daphne Pate, 11, display some of the merchandise students may purchase with Boyd Arthurs Middle School bucks at the school store. A BAMS buck is a positive recognition slip students may receive when staff members wish to recognize a positive behavior. The girls created a video illustrating the wrong and right — or “knight” — ways to behave at school.

By SUE SUCHYTA
Sunday Times Newspapers
TRENTON – Staff say proactively looking for students doing what is right, rather than reacting to what they do wrong has created a contagious culture of respect at a local middle school.

The first level of a Positive Behavior Support program, launched Sept. 4 at Boyd Arthurs Middle School in Trenton with a grant from Wayne County Regional Educational Service Agency, has amazed staff with its quick acceptance and rapid results.

Assistant Principal Debbie Waple said she thought it would be a year before they saw any positive results or a difference in student behaviors. Instead, she has been surprised at how discipline problems, like suspensions, have significantly declined since they implemented PBS with the students Sept. 4 at the beginning of this school year.

“I’m not seeing that many students (for disciplinary reasons), where I was seeing students on a daily basis already at this time last year,” Waple said. “So that was a big shock at how instant the results were.”

The first level, tier one, puts a positive student recognition system in place. Positive recognitions include verbal praise, a positive note sent home to parents, or reward tokens that students can redeem for prizes.

Whitwam said that research has shown that 80 to 90 percent of a student population will respond to tier one intervention.

For students who don’t respond to positive acknowledgement, tier two, instituted during the second school year, matches students in need with a staff mentor. Whitwam said they plan to train for tier two in Aug. 2013, and implement it in Sept. 2013 at the beginning of the school year.

During the third year of the PBS program, tier three, the highest level of intervention, involves parents as well, often in a daily communication, and looks at other student assessments to see why certain behaviors are occurring. Whitwam said their plans are to implement tier three in Sept. 2014, with staff training in August before classes begin.

Boyd Arthurs Middle School bucks, affectionately known as BAMS bucks, are tier one recognitions, and are redeemable at the school store or usable to enter weekly prize raffles.

Whitwam said that by being proactive and trying to prevent negative behaviors instead of always being reactive when something happens teaches students what the staff expects of them.

She said the school has three core values: to be safe, responsible and respectful. She said teaching students the staff’s expectations, with specific examples — like what it looks like to be respectful, safe and responsible in hallways between classes — is a key step.

“It’s not that we don’t think our students know how to behave,” Whitwam said. “It’s just that we all want to be on the same page. We want all the students and staff to have the same message, the same language, so that everyone is treated consistently.”

She said they still have methods and consequences for correcting behavior when students make poor choices.

Waple agrees that a common language and approach to students by the staff is important.

“If I talk to a child I can say, ‘What’s a better way? Is that really respectful? Was that responsible? Were you being safe?’” Waple said. “And they can answer me now because they know what I’m talking about and redirecting them.”

The Wayne County RESA grant provides training for staff at all three tiers over three years, and provides money for incentives and other program support tools, including substitute teacher costs when staff members visit schools who have successfully implemented PBS programs.

“They were all very willing to share,” Whitwam said. “We’re all in the same boat; we’re all middle schools and wanting to do what works for young adolescents. Everyone was willing to share.”

In addition to introducing parents to the program through notes and an open house Sept. 13, the Arthurs staff used imaginative ways to capture student attention.

The teaching staff created, performed and videotaped an original rap to kick off PBS with students.

“They loved it because it was out of our comfort zone to be on the video and rap,” Whitwam said.

She added that the staff received PBS training during a teacher in-service day before school started. Students learn the fundamentals during core courses. Incoming sixth-graders take a class entitled “Sixth grade A to Z” which taught them the PBS lessons.

The filming, done at the end of the last school year and during the summer, caught some teachers by surprise, with humorous results that ended up being part of a bloopers reel.

“Ms. (Laura) Van Noord yelled at us because we were pretending to do it the wrong way,” Pate said of filming the school’s art teacher. “She thought it was actually real and (did not know) we (were) videotaping.”

The girls then showed the teacher in slow motion on their bloopers video, with comic results.

They also caught Waple off guard when they were videotaping the “wrong way” by making excessive noise in a hallway under the supervision of staff member Ronda Burk.

The girls, who also edited the video, now enjoy the recognition of their peers for their acting in the PBS video.

The girls agree that while the BAMS bucks and the prize redemption has encouraged immediate change, PBS is more about changing longtime habits.

Wilding said students do not receive rewards like BAMS bucks for every positive thing they do.

Pate said she already sees positive changes, like people not crammed in the stairwells, and walking on the right side of hallways during class changes.

The girls also see PBS as a way of returning middle school students to positive behaviors every day.

“It’s just being rewarded for positive behavior that you should be doing every single day, but most of the time people don’t,” Wilding said. “And so this is a way… to get people to be positive.”

“Like they used to be, but once they came to middle school a lot of people changed and stuff and got all mean and stuff and teased other people,” Pate said.

“But that changed a lot (with PBS),” Pate said.

In addition to seeing the improved conditions in the hallway traffic, teachers also see students picking up more litter in the hallways and being kinder to other students.

Teacher Karen Van Nieuwkuyk said that teaching the students their expectations has made a huge difference.

“I do see kids helping each other more, probably helping kids that they wouldn’t have helped before just to be kind,” Van Nieuwkuyk said. “I do see that a lot.”

Teacher Leanne Kawadri said it was exciting to see student kindness as well.

“The best change that I’ve seen is just the kindness toward others,” Kawadri said. “I’ve seen kids noticing other kids being kind to others instead of just noticing the negative behaviors.”

Some students just need reminders about what it is to be kind and generous with their time for others, teacher Brooke Tucker said.

“When a kid did something for another student that he doesn’t even hang out with, that is a difference from what I saw from last year,” Tucker said.

She added that students are going out of their comfort zone to help classmates they did not know, adding that quiet students will do kind things but do not want to draw attention to themselves.

She acknowledges that while some students will do acts of kindness to earn BAMS bucks, after a while their actions will become automatic and done without the expectation of a reward.

In addition to showing renewed respect for their school building, teacher Aaron Segedi saw a heartwarming act of kindness on the second day of school that he attributes to the PBS introduction.

Two of his students took a new transfer student from Lincoln Park and showed him where the lockers, lunchroom and other school areas were.

“I thought, what a cool way to approach a new student and make him feel welcome,” Segedi said. “It’s tough to move from a different school and feel accepted, especially as a middle school student.”

Segedi sees both the staff and students buying into PBS to make it successful.

“Everyone bought into it and it’s going to work,” Segedi said. “Everyone’s working together for that common goal.”