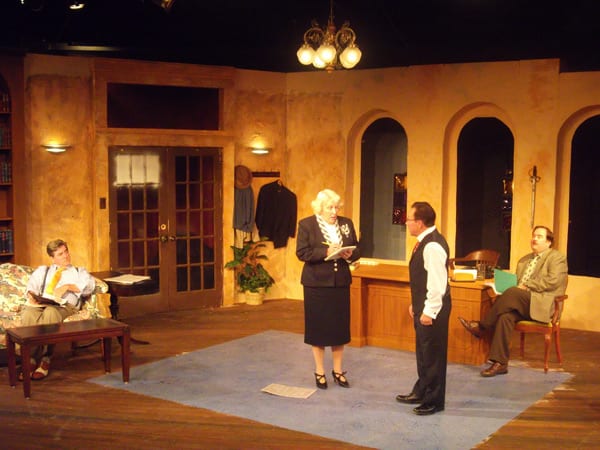 Photo courtesy of the Jewish Ensemble Theatre
In “Moonlight and Magnolias” Wayne David Parker (third from left) of Dearborn plays David Selznick, the movie producer of “Gone with the Wind,” who desperately needs a new script. Also in the cast are Glen Allen Pruett (left) of Flint as director Victor Fleming, Mary Wright Bremer of Warren as Miss Poppenghul and Joel Mitchell (right) of Detroit as writer Ben Hecht. The show runs through Oct. 7 at the Jewish Ensemble Theatre. For more information, go to www.JetTheatre.org.

By SUE SUCHYTA
Dearborn resident Wayne David Parker leads the cast of Ron Hutchinson’s “Moonlight and Magnolias” as “Gone with the Wind” movie producer David O. Selznick through Oct. 7 in the Jewish Ensemble Theatre’s opening production of its 24th season.

The high-energy, strong production is a fun and farcical look at Selznick’s desperate one-week rewrite of the “Gone with the Wind” movie script in 1939 when the movie was already three weeks into production. Selzick pulls director Victor Fleming off the set of “The Wizard of Oz” and lures scriptwriter Ben Hecht from other projects in a desperate one-week attempt to make the movie script true to the book and appealing to moviegoers.

Selzick felt his own reputation would follow the movie’s success or failure as well.
Parker is superb as Selznick, whether he is racing across the stage and leaping onto the furniture, or acting out different movie characters – including an entertaining rendition of Scarlett O’Hara. He also personifies the driven producer determined to make his movie a success, despite his naysayers and his own demons that threaten to derail the character’s confidence.

Selznick is so anxious to make “Gone with the Wind” a success he locks Fleming and Hecht into his office with him for a week to write a script the will make or break his and the movie’s fortune and reputation.

However, the screenwriter has not read the book, and director Fleming is shell-shocked from Munchkin debauchery which he claims includes rewritten lyrics which proclaim “ding dong, the bitch is dead.”

Mary Brehmer is entertaining as Selznick’s able assistant, ably fending off phone calls and supplying the team with peanuts and bananas at her employer’s request.

From the moment the three men launch into the project, which is rife with personality conflicts and thematic differences, Selznick staunchly refuses to alter Margaret Mitchell’s original storyline. Selznick tells Fleming they will act out the book chapter by chapter as Hecht pecks out the new screenplay on an era-authentic manual typewriter.

This leads to some very energetic and entertaining blocking, ranging from Fleming pantomiming giving birth, to Selznick playing the master manipulator Scarlett O’Hara. The play is fast-paced and intense, and one is so drawn into the action on stage that it feels like you are sitting in his office watching the creative process explode instead of in a seat in the intimate theater setting of the JET.

Costume designer Christa Koerner, a recent Wayne State University Hilberry graduate, delivers wonderful period costumes right down to the men’s shoes. The cut of the suits is appropriate to the late ’30s, and the suits are well-tailored, as is befitting high-powered Hollywood movers and shakers. She also effectively shows their clothing’s degradation and decline after the team spends a week in the same clothes in one room with no showers and constant battles and encounters with bunches of bananas and mountains of peanut shells.

Giddy with lack of sleep, the three men have a classic moment where they seem to pre-date a Three Stooges slap fight with bananas and a floor lamp thrown in for good measure.

Properties designer Diane Ulseth capably maintains the era with period desk phones, a manual typewriter, and the aforementioned fruit and nuts scattered throughout the office.

Hutchinson’s script delivers both a fast-paced plot and many entertaining lines, especially to the audience who already knows the success that “Gone with the Wind” will enjoy as a movie.

The commonalities and conflicts between the three men makes for some fascinating dialogue as well without ever becoming too serious or preachy.

From the moment you imagine the creative team’s vision of Tara to their stumbling upon the perfect closing line for Clark Gable’s Rhett Butler, the show is a fascinating and entertaining glimpse at the possible creative process of some the Hollywood’s legendary moviemakers.

It’s also a look at creative and driven men who made movie magic between the Depression era and American’s entry into the World War II.