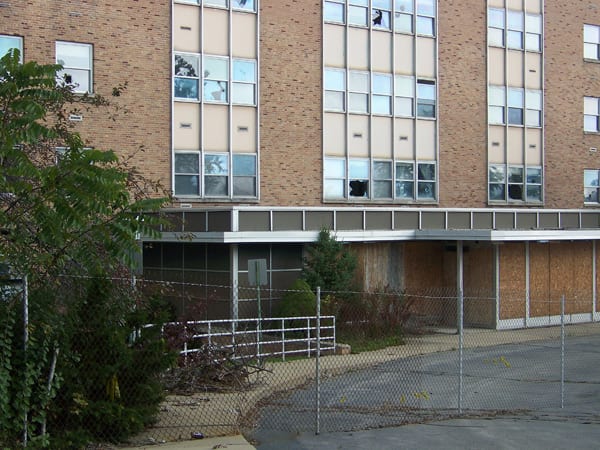 Photo by James Mitchell
Trenton City officials hope to soon resolve deed restrictions and property plans for the former Riverside Osteopathic Hospital. Since closing in 2002, the property has fallen victim to vandals, broken windows and rumors of being haunted.

By JAMES MITCHELL
Sunday Times Newspapers
TRENTON — Something will be built on the former Riverside Osteopathic Hospital property on Jefferson, but city officials remain uncertain just what that will be or — more to the point — when.

The abandoned complex has been a problem for many years and several city administrations. Henry Ford Health Systems bought the property in 2001 and closed it the following year. HFHS sold the property several times over the years with deed restrictions preventing a hospital complex from competing with nearby Ford Wyandotte Hospital.

A series of developers launched ideas that did not materialize into projects, turning the building into what city officials now consider a hazard in addition to being an eyesore.

“They don’t realize how dangerous it is to go in,” Mayor Kyle Stack said of scavengers or curiosity-seekers, some attracted to the urban legend that the property is haunted. Trenton police reports frequently include trespasser activity and vandalism: Although enclosed by a fence, access is found and the building is filled with broken windows.

Stack said that security is expected to increase, especially heading into Halloween, but that more definitive answers may finally be heard in the next few weeks as to the future of the property. After years of false starts the city thought the answer would be in a proposal put forward by Dr. Iqbal Nasir, who planned a $13 million nursing center and assisted living home.

Those plans were derailed when Nasir — chief of staff at Oakwood Southshore Medical Center — told council last month that the planned Riverside Commons was unable to proceed due to HFHS’s deed restrictions. Nasir reportedly put a bid in for property in Riverview for that project, but remains committed to working with Trenton officials on the Jefferson Avenue property.

Stack met with Nasir Wednesday, and meetings were also held with HFHS representatives. City Administrator Jim Wagner said that both HFHS and Trenton are determined to see improvements begin soon.

“We’re both between a rock and a hard place,” Wagner said of HFHS and Trenton. “They have concerns, we have concerns. We need to get this resolved; neighbors waited nine years and we need to be aggressive.”

HFHS Marketing and Public Relations Specialist Stephanie Scheer said that the company will participate in future discussions with Nasir and Trenton officials.

Nasir was unavailable for comment, but is expected to soon meet again with Trenton officials.

“He still wants to pursue doing something at the Riverside site,” Stack said. “He won’t be able to do what he had in mind. As it stands the building gets more blighted, the windows are out.”