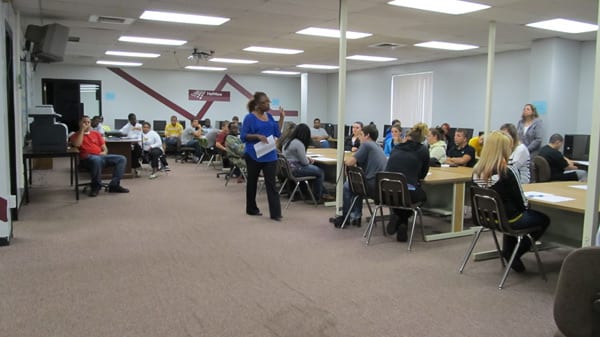 By SUE SUCHYTA
Sunday Times Newspapers
TAYLOR – Giving children a chance to earn the credits they need to graduate from high school inspired the launch of Taylor’s Virtual Learning Academy this school year.

Jeramiah Caplinger, 16, of Taylor, is eager to receive his laptop.

“I can learn more,” he said. “I can learn all kinds of things… I can log in anywhere and it’s all based on how much time you put in… I’m very excited and can’t wait to start.”

Program manager Pat Scott said Teresa Winnie, assistant superintendant for curriculum and instruction in the Taylor Public Schools, saw an opportunity in the district for students who were not earning the credits they needed to graduate from high school.

“We had too many kids in this area not earning high school diplomas,” Scott said. “Something had to be done – the needs of these kids had to be met and it had to be a priority.”

There are also teens from Detroit, Romulus, Southgate, Waterford, Wayne-Westland and Woodhaven school districts enrolled in the TVLA through the schools of choice option.

In addition to the online classes, which require on-site visits of two hours two days a week, TVLA allows students to enroll in classes like welding and culinary arts at the adjacent vocational center. Students may also choose classes like marching band and drama at either Taylor Truman or Kennedy high schools.

“They are not limited to what they can do just because they’re doing virtual learning,” Scott said.

In addition to helping students earn the credits they need to graduate, staff members said they hope to help students with social skills, behavior interventions and family issues like teen parenting challenges and family homelessness issues.

“Some of the students have social difficulties, which is one of the reasons why they find the computer school so appealing to them,” Michelle Calvillo, a school social worker, said. “So helping them gain social skills so that they can be successful after graduation with college, a career… to prepare them to be successful adults, (we’re) giving them those skills.”

“This is an influential time in their lives,” Calvillo said. “They have a choice: They can go one way or they can go another way. Sometimes they just need positive people in their lives to help them go in a positive direction.”

About 105 students have enrolled in the incoming TVLA class, and Scott has met with each student as well as a parent or guardian. She said it is important to have open lines of communications with the families to assess student needs for counseling and mentoring.

“I know we are the only program online that offers mentoring to the children when they come in,” Scott said. “We are the only virtual academy Downriver… that has a blended program, where they do the online at home, but they come in and meet with a mentor, (and) one-on-one in small groups to assess their weak areas and so they can be helped before they go back to their computer and work on those modules.”

Mike McLean, who manages Programmed Logic for Automated Teaching Operations, said most of the students are already comfortable with computers and if they are self directed and work hard, they can move through the class modules reasonably quickly.

“Some of them are here with us because they’re not self directed,” McLean said. “They don’t have a lot of self-discipline… They are going to have to find (it) in themselves, or this isn’t going to work for them either. There’s no magic bullet.”

He said within a few weeks, a student should be able to pass a class. He said that students could also pretest out of a section of material they already know. Some classes require a lot of work from a student, and some a lot less work, he said.

He said different courses have different numbers of units, and some have offline work that is not collected, but which students need to understand to pass the final test.

“The classes are all different, but if you’re doing a couple… hours a day…they’ll be on track to pass and to rack up credits at a reasonable pace.”

He said instead of a traditional semester, with up to six classes, they start students out with a couple classes and let them progress at their own speed.

“My experience in dealing with these guys is if you give them three or four or five classes their attention is split between too many things; they don’t concentrate on anything,” McLean said. “This one’s part done; this one’s part done – they start to get overwhelmed a little. We’ve got a couple they can target, do well on, and then we move on.”

He said students should be able to finish the two classes in about a month. He said they would get about eight classes done in about a four-month period.

McLean said TVLA actually allows students more flexibility to get a job and do outside activities.

Calvillo said it is easier for teen parents to find sitters for two hours twice a week instead of for the six hours a day, five days a week that they would require in a traditional high school setting.

Marilyn Stewart, a mentor and certified teacher, said the program works well for students who have attention deficit hyperactivity disorder since they can chose the amount of distractions they have in a room, or have none at all, adding that students can avoid the behavior problems that hinder student success in a traditional classroom.

Student Chad Sargent, 19, of Taylor said it is easier for him to not be in a classroom all the time nor have to deal with other students.

“You can just sit down at home and get on the computer anytime you’re available,” Sargent said. “It’s easy; it’s all your time, and there’s less of a distraction. There’s no one else there to really get in your way.”

He added that with the laptop, he won’t have to worry about forgetting papers or assignments at home, because all his work will be online.

Angelina Bow, 17, of Taylor, appreciates being able to study away from school.

“You get to still come in twice a week, but the other days you can do your work at home, at (your) own pace,” she said. “I am a very unfocused person at school. It makes it easier for me.”

Scott added that parents appreciate a program that meets the needs of a tech- savvy generation.

“We have to stop trying to fit kids into the box, the mold we grew up in, in our generation,” Scott said. “It’s high time we hit them where they are.”

Scott said the biggest challenge to keep the students on task is teaching them time-management skills.

“They’re going to have to log in an adequate amount of time on those laptops to get the work in,” Scott said. “I just think that’s going to be the most challenging to them.”

Cavillo added that the time management skills that make them successful with their online classes will help students be successful in college and at a job.

Marquette Steffke, 16, of Taylor, likes establishing her own schedule to study outside of school.

“I’m more of a person who likes to work on my own,” she said. “I don’t do good in a school setting because it’s just really public; it stresses me out.”