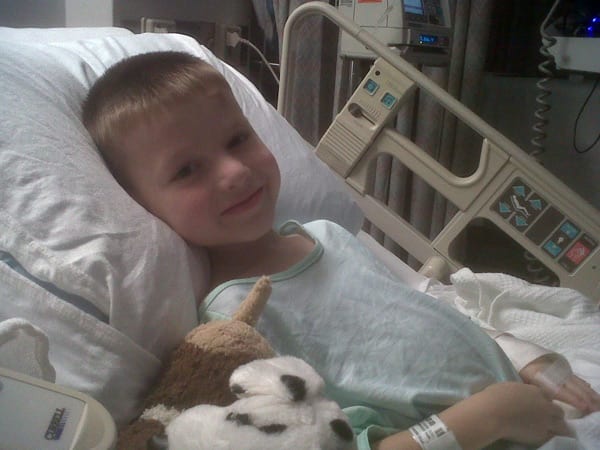 Photo courtesy of The Leukemia & Lymphoma Society
Parker Shanton, 5, of Allen Park, has been named Honored Hero of the Leukemia & Lymphoma Society’s 15th anniversary Downriver Light the Night Walk, to be held Friday 12 at Bishop Park in Wyandotte. Parker is shown in the hospital during treatment for acute lymphocytic leukemia. He currently is the maintenance phase of treatment, which is expected to continue through November 2014. Parker’s Pals will be among the teams participating in the walk.

By Evelyn Cairns
An Allen Park 5-year-old who has been hospitalized 20 times in his fight to conquer leukemia, will be recognized as the Honored Hero of the Leukemia & Lymphoma Society’s Downriver Light the Night Walk Oct. 12 in Wyandotte.

The youngster, Parker Shanton, will head up the team Parker’s Pals at the walk, which will begin with festivities at 5 p.m. in Wyandotte’s Bishop Park celebrating the 15th anniversary of Light the Night.

A remembrance ceremony at 5:45 p.m. will be followed by a program at 6:15 p.m. and the walk at 6:30 p.m. Founders of the walk, Karen Ranka, Rob Bovitz and Evelyn Cairns, will be recognized at the program, which will include the serving of a celebration cake and other refreshments.

Parker, who was diagnosed with a form of the disease called acute lymphocytic leukemia last year, is the son of Mike and Erica Shanton and brother of Harrison, 10, and Madeleine, 12.

The 5-year-old is currently in the maintenance phase of his treatment which is expected to continue through November of 2014.

Among the teams of walkers joining Parker’s Pals will be representatives of the Wyandotte Bank of America branch, Oakwood Hospital and Ford Drive, both of Dearborn, and Compass Self-Storage of Flat Rock.

For additional information, call Stephanie Holland at 800-456-5413 or go to www.lighthenight.org/mi.

Red-carpet gala slated
In keeping with the theme “Classic Hollywood,” a red carpet will be rolled out for the 18th annual gala and silent auction of the Information Center of Taylor with Marilyn Monroe and Frank Sinatra impersonators available for photographs with guests.

The event, scheduled for 6:15 p.m. Oct. 11 at Crystal Gardens, will feature Detroit entertainment reporter Greg Russell as master of ceremonies.

Russell, host and producer of the syndicated program “Movie Show Plus,” which airs on WMYD Channel 20, is known for interviews with such celebrities as Denzel Washington, Julia Roberts and Nicole Kidman.

For the last 10 years, Russell has been the local host of the “Jerry Lewis Labor Day Telethon.”

Entertainment will be provided by vocalist Kevin Sands, singing hits of Tony Bennett, Dean Martin and other Hollywood legends.

Proceeds will fund programs of the center, which serves Downriver with information and referrals.

Rotary plans dinner, play
Teams of four will put their heads together Oct. 18 to vie for prizes in solving a murder mystery to be staged by members of the Trenton Rotary Club at the Trenton City Hall.

The interactive performance will follow a 6 p.m. dinner to be catered by The Rhapsody and include beer and wine.

Mary Zeleski of the Downriver Youth Performing Arts Center is the director.

Tickets, $35, are available by calling Noel Jackson, club president, or Debbie Jackson, organizers of the event, at 734-671-2202 or going to www.dypac.com. Proceeds will fund Childhood Literacy and other Rotary projects.