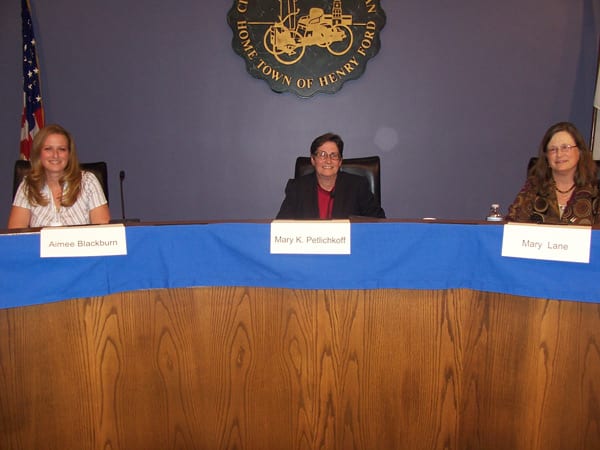 By SHERRI KOLADE
Times-Herald Newspapers
DEARBORN — Three Dearborn Public Schools Board of Education candidates spoke about their hopes for DPS students, critical problems facing the district and other relevant topics during a candidate forum Oct. 2 at City Hall, 13615 Michigan Ave.

Mary Petlichkoff and incumbents Aimee Blackburn and Mary Lane, also board president, are vying for two six-year term trustee spots on the school board during the Nov. 6 general election.

League of Women Voters of Dearborn-Dearborn Heights member Chris Sullivan-Rathwell moderated the approximately 45-minute candidate forum, hosted by the league, and the candidates answered pre-written questions from the audience and often referred to their written, timed remarks.

Sullivan-Rathwel kicked off the first question by asking about the candidates’ vision for the future of the Dearborn Public Schools district.

Lane said she hopes the 19,000 Dearborn Public Schools students will come out of school prepared for the future.

“Ready for work and ready to go to college,” Lane said. “What we define as an educated person in our society, that is what I believe every child and every family is owed. And I would like to see everyone achieve that.”

Petlichkoff answered the question next and echoed similar sentiments.

“I keep hearing that we lost our edge in the community in regards to quality and that perception is one that I would like to change,” Petlichkoff said. “I would like to rebuild the district that is recognized as a leader in education. I believe that we need to work for securing the best in student achievement from the tax dollars that we have available.”

Blackburn said she has a vision of the district in which all children can learn.

“I think that in today’s society we need to prepare our students not only to recite technical information but be prepared with critical-thinking skills that can help them become better citizens in our country and in our global economy,” Blackburn said.

Lane has also served three terms on the school board. She received her bachelor’s and master’s degrees from the University of Michigan and received post-graduate training in immigration law and English as a Second Language.

Petlichkoff, who served as a trustee for one term, which ended in 2011, graduated from the University of Michigan-Dearborn after majoring in psychology and worked in the banking industry for nine years. The retiree ran for the board several times and last ran in 2006. She is the vice president of the Dearborn Parent Teacher Student Association Council and other neighborhood and civic organizations.

Sullivan-Rathwell asked the candidates what they saw as the most critical problems facing DPS and what qualities they brought to help resolve those issues.

All three women said the most critical problems facing the district are budgetary issues and student achievement.

Lane said because of tough economic times there are a lot of things the district would like to do but cannot.

“We are at state average, more or less, in our student achievement,” Lane said. “But we need to be better and we always need to push that.”

Blackburn said she believes by keeping track of the budget and student concerns, goals are reached more quickly.

“There are a lot of things that happen in the district with finance and budgetary issues that distract us from our goal,” Blackburn said, “which is to help the students achieve their goals.”

Petlichkoff said she would bring research-based initiatives to the table and maximize students’ potential.

The candidates answered a two-part question regarding what responsibilities the school board members have toward the taxpayers and community and how taxpayers would know whether the board members are fulfilling their duties.

Blackburn said taxpayers can look to the 30 school district buildings and see how well the board is doing.

Petlichkoff said DPS is one of the largest school districts in the county and with a budget close to $2 million, it is the district’s job to maintain a transparency policy.

Lane said she encourages residents to stay vigilant and always ask the board questions for clarification.

“We absolutely have the responsibility to good stewardship for our community,” Lane said.