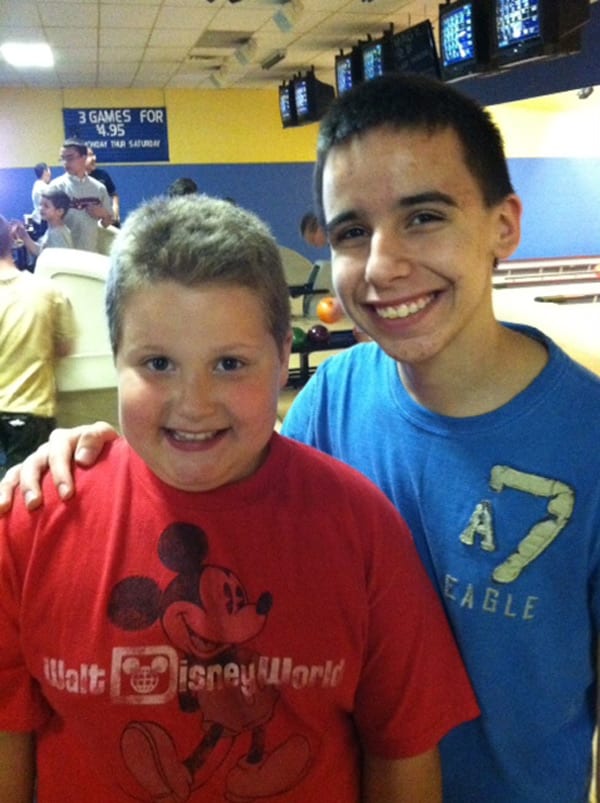 Participating elementary schools reported a 30 percent decline in discipline referrals among participating boys, and academic improvements ranging from 50 to 80 percent among the young boys.

Dunholter said she always wanted to have a mentoring program for the boys, but it took several years for her to find a staff member at the high school willing to help champion and volunteer their time for a program for boys.

“A lot of people said (we were) not going to get boys to be mentors,” Dunholter said. When the boys’ program started in 2007 the athletic coaches supported it and encouraged their athletes to sign up to be mentors, she said, adding that non-athletes are volunteer teen mentors as well.

The early elementary-age boys meet once a month with their big buddies to do an activity, for 90 minutes, and they’re matched with the same teen mentor throughout the year, Dunholter said. A bus brings the children to Anderson for the once-a-month morning activity.

While Dunholter said the program successfully focuses on helping at-risk elementary-age students; she and the parents of the teen mentors are pleased with the positive impact the program has had on the high school volunteers.
Parents report that they see a positive change in their high school student; they see them being a little bit more interested in caring for and thinking about someone else.

She said originally they called their program “Big Brothers Little Brothers,” but to avoid confusion and because they are not affiliated with the national program by that name, they now refer to their program as the Big Buddies Little Buddies program.

The program relies on donations to pay for the buses and program materials, and she hopes to use the $2,000 MASB award for the program.

Gavin Stratford, 8, a third grade student at Fordline Elementary School, said he had fun with his big buddy Andy Ross, 16, and now a junior, during the past school year.

“He did activities with me,” Stratford said. “We used to watch movies together and it was fun being with him. He gave me good advice and he was a really good listener.”

He said when he gets to high school he would like to be a big buddy like Ross.

“I like to do activities with him,” Stratford said. “And he’s just so special to me. He makes my heart full of joy.”

Ross said he wanted to become a big buddy to make a difference in both the community and someone’s life.

During his sophomore year Ross was a big buddy to Stratford. This year, as a junior, Ross said a conflict with his morning health career program prevents his direct participation in the program. Dunholter said matching Stratford with a new big buddy will be a priority.

Ross said it took two meetings for Stratford to become comfortable with him.

“I sat him down and asked him questions about how school was going and how things were at home, and he finally opened up to me at the second meeting,” Ross said.

He said Stratford began to trust him when they teamed up on an obstacle course activity.

“When you had to trust someone with their directions, he really had so much fun with that,” Ross said. “You could just tell by the look on his face that he was having a blast.”

He said he had fun watching Stratford express himself while coloring.

“Just watching him having so much fun… just really made me happy that he can express himself that way,” Ross said.

“It was such a blast, such a pleasure last year.”

Ross said that setting a good example for his little buddy was important, too. “You got to be a big role model, show them how to be respectful and stuff,” Ross said.

Dunholter said she has also seen her share of heartwarming moments.

She recalls how one big buddy was perplexed when his little buddy didn’t want to participate in activities. She reminded the teen that problems at home and school can cause a young boy to respond in that manner.

She was pleased when the teen successfully stepped up his efforts to reach the withdrawn boy.

“ I saw (the big buddy) instead of shutting down and being like ‘Oh, you are just being stubborn and don’t want to participate’… really trying to engage him and spending time with him and trying to work with him to get him to get engaged,” she said. “And that was really cool to see.”

One parent of a fourth grader said her son was disappointed that he aged out of the program. He wears a T-shirt he decorated with his big buddy constantly.

“So it’s just great to hear those stories,” she said. “I’ve heard a lot of stories (from little sisters that) they’re still in touch with their big sister even now that they’ve graduated or moved on, so we’re looking forward to hearing some of the boys’ stories like that, too.”