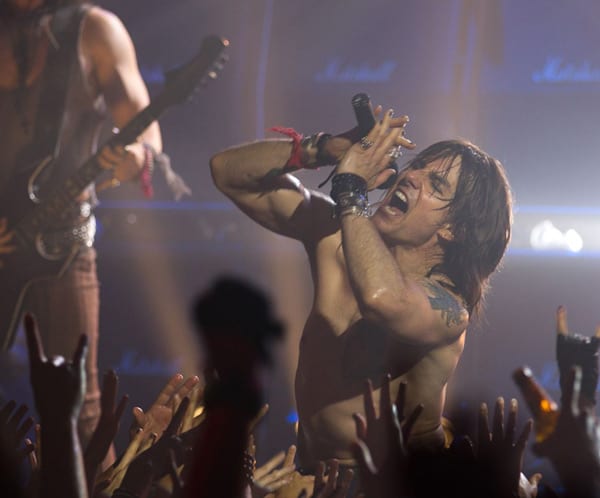 Tom Cruise in “Rock of Ages”

PICKS OF THE WEEK
“Prometheus” (R) — Ridley Scott directs this (kinda) prequel to “Alien,” wherein a bunch of planet-jumping archaeologists explore the ruins of an alien civilization and discover all kinds of bad stuff there in the dark: alien monsters, ancient doomsday technology, bone-chilling revelations. Really, they were asking for it.

Charlize Theron is the captain of the ship, and Michael Fassbender plays the erudite android. Fassbender’s performance holds up the film pretty well: He’s detached an awkward enough to be a mixed-up android, but he’s observant and curious enough to be a dangerous intellect. Like many of its peers, the movie shifts from spooky sci-fi exploration to all-out terror near the end.

“The Raven” (R) — John Cusack stars as the horror-mystery author Edgar Allen Poe in this Gothic thriller. Somebody is imitating the brutal murders described in Poe’s crime stories, so the Baltimore police detectives bring in the writer to help solve the case. While it’s well-researched, the film isn’t quite on Poe’s level with its by-the-book storyline and enormous plot holes. But really, how many well-researched Gothic murder mysteries are coming out these days? “The Raven” is spooky and interesting enough to keep you along for the ride.

“A Cat in Paris” (PG) — Dino is an adorable house cat in a colorful and stylistic animated version of Paris. By day, he lives with a little girl who doesn’t speak; at night, he works with an agile human thief who climbs into buildings — a cat burglar, if you will. One night, the little girl follows Dino and gets caught by some gangsters planning a heist. Dino and the burglar have to team up and go on a scenic adventure to rescue her.

DOG OF THE WEEK
“Rock of Ages” (PG-13) — It’s exactly what all the posters promised: a big cheesy musical full of ’80s hair metal. A pretty young girl from Oklahoma decides to follow her dreams to the glamorous Sunset Strip in LA. She meets some handsome guy who plays guitar, and then they sing as if their relationship is just so incredibly unbelievable. Tom Cruise, Alec Baldwin, Russell Brand and Paul Giamatti are there to be funny. Musical numbers are all drawn from late ’80s rock, including Journey, Bon Jovi and Night Ranger.

All of the music is sung by the actors themselves. No matter how goofy the songs might sound to us today, you’ll always notice that the actors just can’t come close the vocal abilities of the original performers. You’ll be sick of this movie well before the final number.