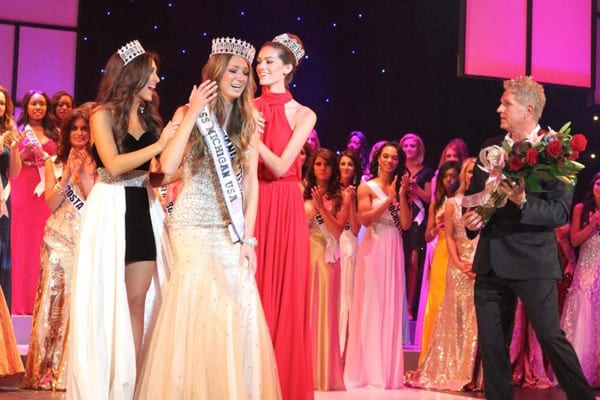 Photo courtesy of Jaclyn Shultz
Wyandotte native Jaclyn Shultz is crowned Miss Michigan, beating out more than 100 other women from the state, in Port Huron Saturday.

Schultz, 24, who was crowned Miss Michigan USA Saturday after a two-day competition in Port Huron, said the win was even more shocking considering it was her first-ever pageant.

“My head was spinning, I don’t even really remember,” she said Wednesday. “I couldn’t believe it.”

Schultz, a 2006 graduate of Theodore Roosevelt High School, said she entered the pageant this summer after seeing an ad online.

“I was looking for a new challenge,” she said. “I went into it just thinking it was fun.”

To prepare for the pageant, the former RHS basketball and volleyball player relied on her love of working out – running, lifting weights or taking spinning classes five or six days a week.

Though it was her first pageant, she had no coach and balanced her training with her full-time job at an advertising agency and her pursuit of a master’s degree in advertising from Michigan State University. She earned a bachelor’s degree in public relations from Central Michigan University in 2010.

After her win, Schultz said she had a pretty low-key celebration – a long nap – before returning to work as usual Monday morning.

“I just went into work Monday morning like it was a normal day,” she said. “The entire office surprised me with a banner and balloons.”

Now, Schultz said she’s getting back into her normal work routine and “coming off a cloud” before gearing up for the 2013 Miss USA pageant Jan. 12 in Paradise, Nev.

“I’m just excited to represent the state of Michigan and have fun as well as meet a lot of people,” she said.