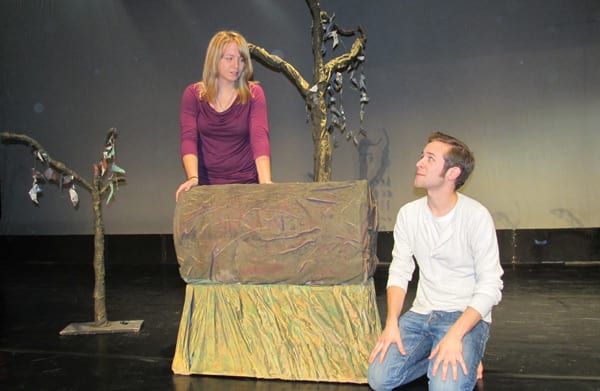 By Sue Suchyta
A stage version of  the novel, “Bridge to Terabithia,” adapted by Katherine Patterson and Stephanie Tolan, opens at 7 p.m. Nov. 9 for the public, and at 10 a.m. Nov. 12 for school matinees in Adray Auditorium at the MacKenzie Fine Arts Center on the campus of Henry Ford Community College.

The show follows two children, Leslie and Jesse, who learn to trust each other and their imaginations to create a magical, imaginary world in the woods that they name Terabithia.

Facing one’s fears and dealing with grief are also lessons interwoven into the show.

Andrea Wells-Preister, 20, of Allen Park and India Jackson, 20, of Detroit share the lead role of Leslie at alternating performances.

Kyle Traicoff, 19, of Northville and Christian Plonka, 18, of Dearborn share the lead role of Jesse.

Wells-Preister said that her character reveals to Jesse that being different isn’t bad, and that it can in fact be good. She helps him reclaim the part of his childhood that he had surrendered to the hard work of his family’s farm.

She said it is important to see how imagination can renew a person.

“These kids make a whole entire playhouse universe out of just some wood and an island,” Wells-Preister said.

She said she also feels that it is important to expose young people to live theater.

“The enrichment you get… from people performing something and putting so much work into something… to make it look… and feel so real is amazing, which is why I love theater so much.”

She added that the storyline is great as well.

“It’s about bullying and being a child and being true to who you are, even if not everybody’s OK with it,” Wells-Preister said. “Kids really need to see that these days. And I think they need to see also that they can get out of the house and do things without technology, without having all the money in the world, and without going onto the computer for all their entertainment or watching TV.”

Jackson said that live theater shows young audiences that it is OK to express yourself.

“That is the reason I joined theater,” Jackson said. “I’ve been doing it all my life… I feel that people need to do live theater because – hey – you need to express yourself, to (do) something new, more than just watching a movie, instead of being at home.”

Wells-Preister added that the wide range of emotion expressed in the stage play is an important part of the experience for young school audiences.

“It allows you to feel and experience what is going on with this person and connect with this person,” Wells-Preister said. “And (to) understand that bad things are going to happen in your life and bad things happen not just on TV, but also to yourself.”

She said she knew from personal experience the pain of losing someone in an accident.

“It’s hard to deal with, and it’s never something that you can prepare for,” she said. “But I feel being able to talk about it and cope with it is something that gives you a lot of strength as a person.”

Jackson added that she hopes young audiences will take away an important life lesson from the show.

“Friendships will always work out, bad or good,” she said. “I think they’ll learn a lot from this show.”

“It’s really about being different, and being accepted and trying to find sort of your own way,” Brehmer said. “It’s at a time when people are ten, eleven-years-old and that’s a crucial age for deciding which way you’re going to go, which path you’re going to choose in life and who you’re going to choose to take that path with. So I think it’s really crucial that younger students come to the show because they’re kind of in that transitional period.”

She added that older students can benefit from the show’s message as well.

“For older students as well it’s really nice to have the reminder as they start to go through other transitions that there are choices that they make that can also change their lives… hopefully for the good,” Brehmer said.