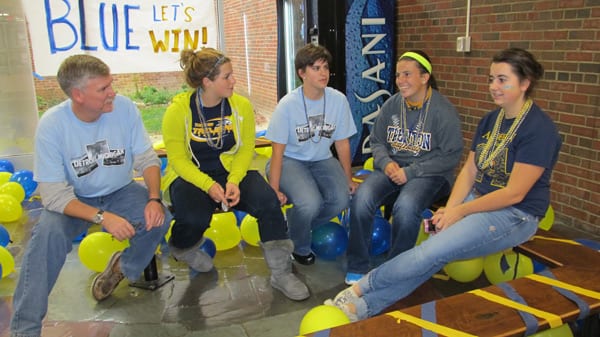 “We focused on our students,” Youngblood said. “We would pull in students periodically throughout the school year and talk to them about keeping them on track and why assignments weren’t getting completed and things like that and just let them know that somebody cared about them at school.”

When Youngblood transferred to the high school to teach science, he said told his freshmen homeroom students that he would track them for four years, every trimester and marking period, and would check with them about their grades, family situation and other topics.

He said every year for four to five years he continued to follow-ups with freshmen during his prep time and before and after school. He continued to ask Wakeham, who was then a department head, if they could begin to focus on students individually more at the high school level instead of just once a year in their homerooms.

“I would do all that on my own time,” Youngblood said. “I didn’t mind doing it, but… this (was) a good idea that we could get all the students and all the teachers to do and get them all engaged.”

He said teachers remember their brightest students and their troublemakers, but sometimes forget the kids who come in, do what they are supposed to do and stay on task.

“You just want to touch base with them, so at least somebody knows that they’re thinking about them,” Youngblood said, “and maybe motivate them into joining something else and kind of improve the experience that they have at the high school level.”

When Wakeham ur-ged him to expand upon the idea, Youngblood formed a committee with assistant principal Ronald Diroff and teachers Chad Clements and Angela Siggia.

The group proposed that every staff member – certified teachers, administrators and counselors – have a group of 17 to 20 students – ideally each with four freshmen, sophomores juniors and seniors.

Each Blue Pride adviser will essentially have the same group of Blue Pride students for their four years at Trenton High School.

The groups met on the first day of schoolfor an introduction to the Blue Pride program. The students set goals, inventoried individual learning styles s and complete a student interest survey for each Blue Pride leader to use to become familiar with their students.

“So basically what we’re trying to establish is that there is a community here at Trenton High,” Youngblood said, “and there are people that care about you… what it is… is another set of eyes, on somebody, throughout the school day.”

The Blue Pride groups meet five times a year for an hour during the school day to focus on an aspect of character.

Participation was the theme Sept. 13 for the first Blue Pride meeting. Some of the activities were one-on-one, and others – including ice-breakers – were done in groups. Staff members and students took turns leading activities.

“In the last meeting I saw kids find out things were going on at school that they never knew about,” science teacher Rebecca Caldwell said. “Someone said, ‘I didn’t know we had a club that worked like a debate team.’ And they said, ‘Where do I see that on the list? Who do I talk to?’ It was just exposure and awareness… I think (over) four years it’s going to be an interesting dynamic to watch kids go through this experience together.”

During the second meeting on Nov. 1, the focus will be respect, and will include a discussion of bullying and how to eliminate it at the high school.

Youngblood said he hopes tips and anecdotes from juniors and seniors will make more of an impression on sophomores and freshmen than classroom teachers’ study skills advice before exams.

Marissa Ridings, a 16-year-old junior, plans to share her study skill advice with underclassmen at the next Blue Pride meeting.

She said flash cards, avoiding all-nighters and doing homework and focusing early on in high school are important to academic success.

She also urges underclassmen to get involved in student activities.

“Get involved, whether it is student council… sports, anything,” Ridings said. “Just make sure that you get involved, because you’re going to meet new people, and it’s going to look good on college applications, and it’s fun – something (you) really enjoy.”

Kristin Aslanian, who is active in student council, softball and golf, said it is a good feeling to be involved with school activities and to know what is going on at the school.