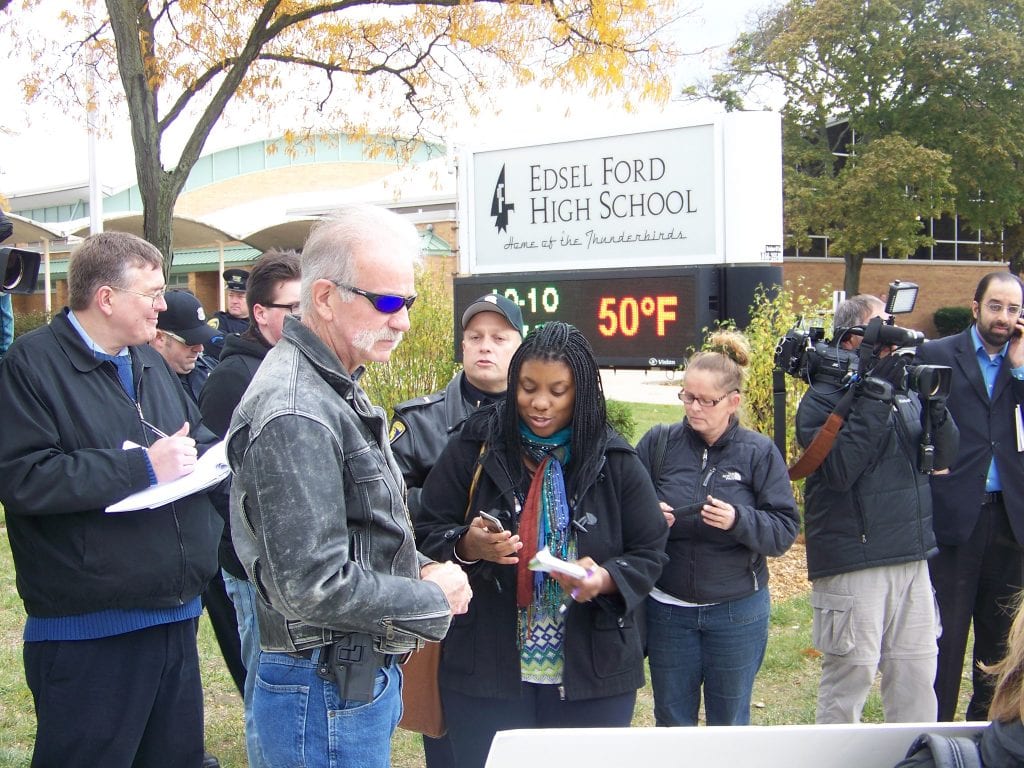 DEARBORN — The Rev. Terry Jones did not give an official speech in front of Edsel Ford High School, 20601 Rotunda Drive, or speak to the school’s principal, Scott Casebolt, like he planned, today but he relayed his message – that Muslim students bullying non-Muslim students is a problem – to members of the press and a few other listeners.

Wearing dark sunglasses, a worn leather jacket, and an empty gun holster, The Gainesville, Fla. pastor, well-known for his speeches denouncing Islam, stood among the media answering questions about why he returned to Dearborn and whether the growing Muslim population in metropolitan Detroit is a threat to America.

“Our message is to raise the awareness of the problem of bullying here,” Jones said in a cordoned-off section in front of the school, several yards away from about 30 protesters holding signs and shouting against his message. The protesters were also grouped off by police.

“We’re all living here and if Muslims are living here in our community they need to honor, obey and respect the laws of our community, the way that we do things,” Jones said.  “I know there have been a lot of problems here in the past and Islam, of course, is not a religion that tolerates any type of criticism of Muhammad, Islam or Sharia.”

Jones said several parents have contacted him because their children have been called names and harassed.

“A lady contacted us and said she had problems here and the Arab kids called her son (n-word) and they downplay it,” Jones said of city and school officials. “It doesn’t get any kind of attention.There seems to be a lot of unfair play here.”

“I’ve seen some of the Muslim kids bully the American kids and my daughter has seen bullying in the lunchroom and pushing and shoving in the hallway,” Brusech said. “And I’ve worked for Arabic people and they have treated me horribly. I think it is the way they are taught to treat their women; the men treat the women like they are their personal slaves.”

Dearborn resident Mary Collins, whose daughter attends EFHS, stood with the protesters and said she took her daughter out of school on Oct. 10 because her daughter was afraid.

“She was afraid of everything,” Collins, who held a sign that read, “Stay away from my kids,” said. “She was afraid because (school officials) told her there would be bomb squads here.”

Collins, who said she is not familiar with Jones’ message, came to EFHS to see what Jones had to say.

“I don’t know what he says or what he believes, I don’t care at all,” Collins said. “All I care about is why my kid couldn’t go to school today. As long as he stays away from the school we are fine.”

Jones spoke to mainly the press and a handful of supporters, some who held signs and wore shirts that said “Islam is a bully don’t be a victim,” and “Islam is the new Nazism.”  Several passersby in cars shouted obscenities, honked their horns and gave hand gestures to Jones and his supporters during the duration of Jones’ visit.

About 30 minutes into Jones’ visit he attempted to head into the back entrance of the school, when several buses pulled into the driveway to pick students up, but police told him at the school’s gate he could not enter the property and he turned around and then stood at the corner of Rotunda and Pelham and spoke for about 15 minutes, answering more media questions.

“We aren’t going to back down or stop,” Jones said. “Sitting down and talking doesn’t do the job. Our support is growing. As I have tried to say many times, we have nothing against Muslims or the Muslim community. They are protected under the First Amendment, they can worship, build mosques, evangelize.

“Our message is strictly to the radical element — or the element that would like to institute Sharia (a set of rules put in place by the Quran) or would like to limit or ban free speech.”

Jones said he originally wanted speak with Casebolt and find a solution to the problem of bullying.

Jones came to Dearborn in April to speak in front of the Islamic Center of America — to a handful of residents and the media — and a few times in 2011 to discuss his beliefs of Islam being a threat to American values.

According to website www.standupamericanow.org, Stand Up America Now! represents Christians and minorities in Islamic-dominated countries. The organization also protests abortion, same-sex marriage and other areas “the modern church of today shys away from,” the website description said.