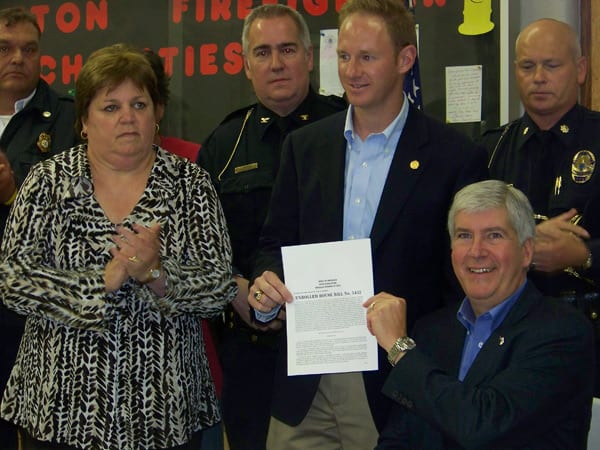 By JAMES MITCHELL
Sunday Times Newspapers
TRENTON — More than just an old-fashioned prank call, false alarms designed to dispatch emergency services and first-responders have become enough of an issue that a new phrase has been coined.

“They call it ‘swatting,’ there’s even a phrase for it,” Michigan Gov. Rick Snyder said.

False alarm calls were obviously discouraged, but with limited penalties for those convicted.

Snyder visited Trenton Monday for a ceremonial bill signing to change that. Snyder applauded what he called “good, common-sense legislation” that addressed what previously was little more than a slap on the wrist.

A series of three House Bills — HB 5431-5433 — provide graduated penalties for false alarms made either by phone or over the Internet. Along with requiring those convicted to reimburse police or fire agencies for costs related to the response, the legislation enacts a series of fines and makes the false call a felony if someone is injured or killed as a result.

Laws regarding “swatting” — so named for the potential call to spark a response by a SWAT team — are being approved nationwide and the three-bill package moved quickly through the Michigan legislature before being from bill page 1-A signed last week. Among the proponents was state Rep. Pat Somerville (R-Huron Township), whose district includes Trenton.

Snyder said the legislation addressed a growing problem and did so with limited opposition.

Snyder said he was pleased to sign the bills in the company of police and fire officers.

“They put their lives at risk on a regular basis,” Snyder said. “False alarms are dangerous for everyone. When someone makes false calls it puts everyone at risk,” with high-speed traffic and a drain on community resources that might be needed elsewhere.

“Public safety people have a difficult enough time,” Snyder said. “We needed to put some real teeth in (the bill). We didn’t have these laws in place, and we need to stay on top of it.”

Nardone said the legislation can help deter some of the incidents by requiring reimbursement and defining stiffer penalties. The practice is particularly risky in smaller towns where a false alarm can exhaust available responders and leave a population unprotected.

“It’s an escalating event, and this is more in depth and long overdue,” Nardone said.