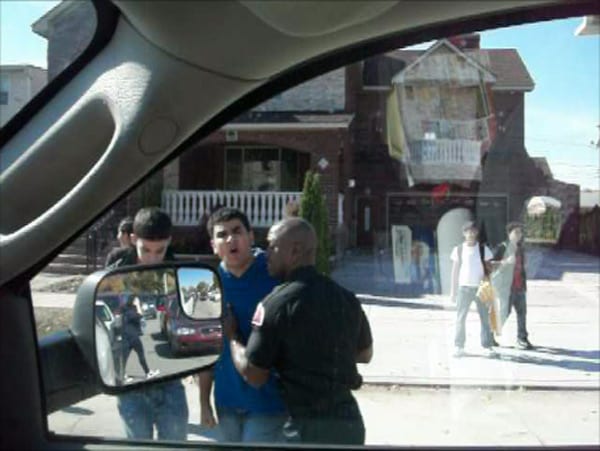 Photo courtesy of Dan Fullmer
An unidentified young person (second from left) shouts at Dan Fullmer while a Fordson High School security guard (right) holds him back on Horger Street near FHS Oct. 17.

By SHERRI KOLADE
Times-Herald Newspapers
DEARBORN — A metropolitan Detroit resident said the Police Department failed to arrest Fordson High School students who he claims threw items at his vehicle while he drove near the school with Israeli flags displayed.

Dan Fullmer, 42, who preferred not to say which city he lives in for safety reasons, said that on Sept. 14 and Oct. 17 he drove near the high school, displaying two window-size Israeli flags on both sides of his two-door pickup truck’s windows about 2:30 p.m., after school let out at 2:15 p.m.

Fullmer, who grew up in Dearborn and is a Fordson graduate, said while he drove near the school some students became hostile and aggressive, waving Palestinian flags and objects at him.

“When I made (a turn) on Horger Street the students were yelling and shouting,” Fullmer said.

Fullmer said he flew his flags to exercise his rights and the two times he drove past FHS he did not attempt to provoke the students.

Fullmer said he talked to the students once, asking them to stop throwing objects.

“(He was) trying to antagonize and provoke them to create a disturbance,” Mustonen said.

Fullmer said that Dearborn Police Sgt. Andreas Barnett and other officers did not let him see police reports after the incident but they gave him the option of filing a Freedom of Information Act request for the documents; Fullmer did not file a FOIA request.

Fullmer told Barnett that he does not plan on taking any legal action against the police.

“I just want you to enforce the law,” Fullmer said of Dearborn police. “They don’t seem to get it.”

Fullmer said that when school let out parents double parked their cars on Ford Road and blocked traffic and he could not move.

“The Dearborn police don’t enforce any traffic laws in regard to parallel parking, double parking,” Fullmer said, “and students immediately began using gestures from their hands and then the rock throwing started.”

Fullmer said the students threw rocks at him both times.

When the police arrived, Fullmer said the principal directed the students away from the street. Fullmer said one student then jumped in the back of his truck.

The police eventually pulled Fullmer over on Middlesex Street, and Fullmer said one of the officers told him to take down the flags and that the principal had called police.

“The officer was upset because they had to come out because the principal had called them,” Fullmer said. He said the officer asked him why he was flying the flags.

Fullmer said he told the officer he flew the flags because he was a “freedom-loving American.”

Fullmer did not receive a ticket and was not arrested either time.

A group of students congregated on the west side of Middlesex and began shouting obscenities while police continued taking his information down, Fullmer said.

“Two girls specifically threatened me with sodomy and wanted to take my life,” Fullmer said. “So I asked the police if they were going to do anything with the students and the officer told me … he didn’t hear any threats.”

“It is still an open case,” Haddad said.

Haddad said that on Sept. 14 the police arrested a student who threw a liquid on Fullmer’s windshield and he was arraigned in Third Circuit Court. Because the student is a minor his name cannot be released.

“He was charged with a more serious offense, disorderly conduct,” Haddad said. “He is the only one who did anything that we know of.”

Haddad did not release any further information on the student.

“He did not present any evidence,” Haddad said. “We made a report and checked his car for damage and we found no indication that anything was damaged.”

Mosallam did not return calls seeking comment by press time.