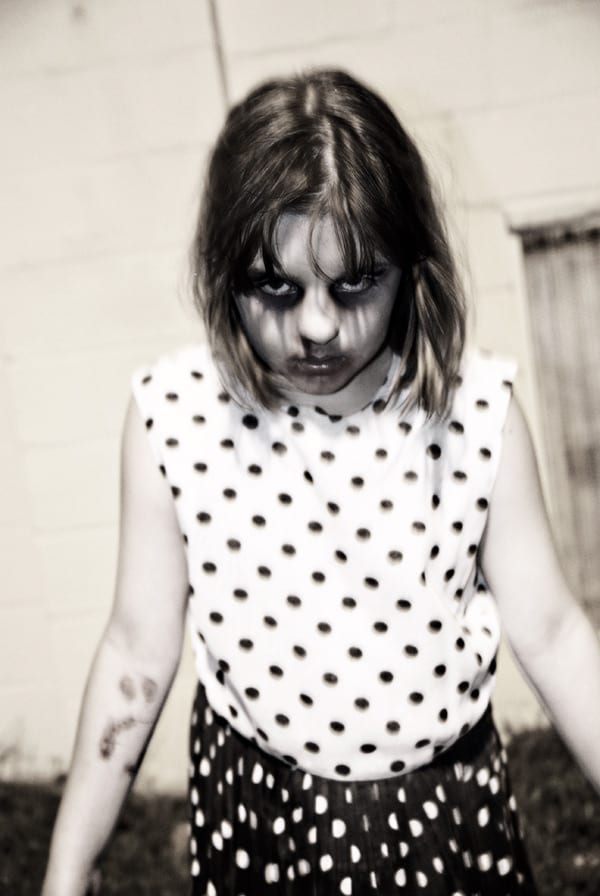 Photo by Cynthia Frabutt
Molly Boudreau, 11, of Dearborn plays Karen Cooper in the Dearborn Heights Civic Theatre live stage production of “Night of the Living Dead.” The show runs at both 8 and 11 p.m. Oct. 26 and 27 and at 8 p.m. Nov. 2 and 3 at the Grantland Street Playhouse, 27555 Grantland in Livonia. For more information, go to www.dhctstage.org.

By SUE SUCHYTA
The Dearborn Heights Civic Theatre kicks off the Halloween season with a live stage version of the classic tale, “Night of the Living Dead.”

Performances are at the Grantland Street Playhouse, 27555 Grantland in Livonia, one half mile south of I-96, and a half block west of Inkster Road.

For more information, go to www.dhctstage.org.

Eric Fallows of Westland plays Johnny, with Greg Bowman of Ferndale as Harry Cooper, Kenyada Davis of Detroit as Ben, Cory Chambless of Plymouth as Bill Bardough and Andrea McGrath of Garden City as Dr. Grimes.

Walentowicz said “Night of the Living Dead,” an iconic name in horror and the original zombie movie, needs little explanation.

“It’s definitely got that name brand already out there,” Walentowicz said. “Most people are actually very excited to see it because when you think of theater you don’t think of ‘Night of the Living Dead.’”

A similarly named show, “Evil Dead: The Musical” runs at The City Theatre, 2301 Woodward in Detroit (next to the Fox) through the end of October, with 8 p.m. shows on weekends. Go to www.OlympiaEntertainment.com for more information.

Walentowicz said some of the themes might be scary for younger children, and recommends it for children in their teens.

When Walentowicz saw “Night of the Living Dead” in a play catalog years ago, he thought it would be a fun show to do. However, he felt the large male cast and extras needed to play zombies were obstacles.

“Flash forward years later we’re trying to think of something to do, and I thought, there’s nothing’s bigger than zombies right about now,” Walentowicz said. “With ‘The Walking Dead’ and zombie culture – ‘Zombie Land’ was a big hit, so I thought maybe now is the right time.”

The DHCT board felt the Grantland Street playhouse was well-suited for the show as well.

As the director, Walentowicz said he is enjoying watching the show during rehearsals.

“I’m getting a kick out of watching a play that’s totally absurd – and I love that they’re treating it like it’s Shakespeare – you’re getting real emotions from this cast, and sometimes you forget that there are zombies coming and you just think it’s this drama of these people stuck inside a house,” Walentowicz said. “So it’s been really fun for me to just watch this, and like, ‘Oh my God, I’m doing a zombie play!’ Just the overall experience – you just don’t get to do many plays where people eat each other.”

He said he thinks the group has done a good job improving the quality of their shows in the last few years, and now he thinks it will be even better with them being in a ‘proper theater.’

“We want to move forward in the future, and we got to start getting a real performance space, and not perform in a cafeteria kind of thing,” Walentowicz said. “So this is our chance to improve and hopefully not just move on but just get better in the eyes of our audience, which is the ultimate master.”

Kenyada Davis of Detroit, who plays Ben, was also looking for a change. He said he’s played roles in musicals and comedies for a while now, and wanted to do something different.

“I just wanted to get out of the box for a little while and try something very new and fresh,” Davis said. “And I’d never heard of anything like “Night of the Living Dead,” the stage adaptation.”

He tells friends that the show is new, has a lot of action, a lot of confrontation drama.

“I live vicariously through Ben’s life because, of course, not a lot happens within our normal day-to-day lives,” Davis said. “So come see the drama!”

Gedert, who plays Barbara, said she also plays a character completely out of her usual repertoire.

She said her character starts the show by putting a wreath on her father’s grave. When a zombie attacks her brother and chases her, she finds herself running into a house and meeting some interesting characters.

“Throughout the play she has a hard time dealing with the fact that the zombies are after her,” Gedert said. “She transforms completely from the beginning of the show to the end of the show.”

She said rehearsals have been fun, and there are times during scenes when she even gets a little scared herself.

“The cast is great, the crew is great, and we’re just having a really good time,” Gedert said. “It’s in an interesting setting – a new setting for the Dearborn Heights Civic Theatre and it kind of adds some ambience to the show.”

Denyer plays Tom, a youth he describes as a victim of circumstance. He said the play addresses, through Tom, the ignorance of youth.

“He’s too trusting of what television and people have told him,” Denyer said. “So when he gets absorbed into the conflicts between Mr. Cooper and Ben he is forced to take sides just as the time when this play was written it was commenting on McCarthyism. And so a lot of people were forced into picking sides, picking a moral obligation or the Republican Party.”

He said Tom is caught up in these same type of choices.

“You have a threat outside that’s invading,” Denyer said. “The revolution is at their back doors and these are mindless beings that are attacking the home.”

He said his character gets overwhelmed because of this choice and his subsequent choices precipitate a tragedy, but that is the horror and Halloween element.

“What this play has to address today is a lot of the same issues that we see from our predecessors in history,” Denyer said. “How I tell people to come see this show if they like horror, if they like zombies – not just because of the walking dead but what the play has in the double meaning, I say come see it.”

Denyer is also the show’s make-up designer working on zombies. He said the zombies are designing their own makeup for expediency and to reflect how they became a zombie.

“This horror piece introduces the fact that these individuals that have the same old idealism are actually the ‘undead,’” Denyer said. “Revolutionists would call them ‘sheeple;’ a horror story would call them zombies. They are the undead, they move without consciousness only for one person to feed and grow.”