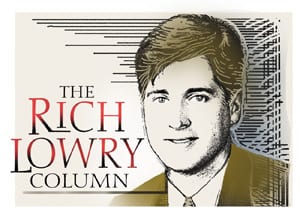 President Barack Obama can’t even get his snark straight.

In an attempt at the cutting cleverness that escaped him during his first debate with Mitt Romney, his campaign aired a TV ad hitting the Republican for his alleged hostility to Big Bird. “Mitt Romney knows it’s not Wall Street you have to worry about,” the ominous voice-over declares. “It’s ’Sesame Street.’”

The problem with the widely panned spot is that it plays less like a spoof of Mitt Romney than a parody of one of the Obama team’s own negative ads. It’s as dishonest, over the top and — for lack of a better word — stupid.

The president of the United States himself — the man who once pledged to elevate our politics and make the oceans recede — has made Big Bird a recurring feature of his stump speeches. He also cites Elmo and Oscar as other characters who need to “watch out.” (The president apparently cares nothing about the fate of Mr. Snuffleupagus, who never rates a mention.)

Obama told an adoring throng at one of his events that Romney “said he’d bring down our deficit by going after what has been the biggest driver of our debt and deficits over the last decade — public television, PBS.” On “Sesame Street,” they would tell you Obama’s statement is spelled U-N-T-R-U-E.

Stipulating “I love Big Bird,” Romney said he would stop the subsidy to PBS, not because it is a big expenditure in the scheme of things, but because he doesn’t want to spend on unnecessary items we must “borrow money from China to pay for.”

Romney’s point is unremarkable. The Corporation for Public Broadcasting gets more than $400 million a year from the federal government. If this is an essential expenditure at a time of $1 trillion deficits and a $16 trillion debt, what is nonessential?

Besides, if the line item for the Corporation for Public Broadcasting were zeroed out tomorrow, it wouldn’t ruffle a feather on Big Bird. On CNN, Sherrie Westin, executive vice president of the Sesame Workshop, cited all the organization’s private funding and declared that, even without government help, “’Sesame Street’ will be here.”

Someone should load that up in the president’s teleprompter so he’s sure to read it. Then, he might at least hesitate before whipping up a crowd — like the one in Cleveland recently — into chants of “Save Big Bird!”

To the extent it isn’t purely cynical, the president’s “Sesame Street” offensive is an extreme example of the belief that civil society is all but helpless without the guidance and succor of government. As if private actors can’t be trusted to keep a popular children’s program featuring iconic puppets on the air, or to preserve the “PBS NewsHour,” or to find a way to broadcast “Downton Abbey” in the United States.