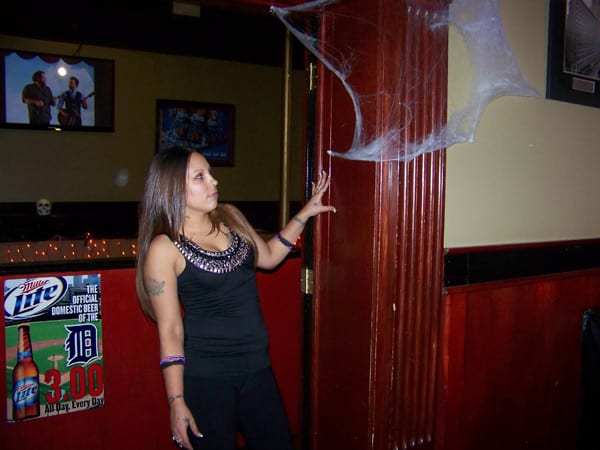 Photo by Sherri Kolade
Double Olive bartender and waitress Melissa Sandberg stands near a high-traffic paranormal activity zone, according to the Motor City Ghost Hunters. Sandberg, who started her job six months ago, said she has not seen any paranormal activity but hearing the paranormal stories is entertaining.

By SHERRI KOLADE
Times-Herald Newspapers
DEARBORN — Doors slamming on their own, bottles moving without help and a palpable paranormal presence is just as much a part of west Dearborn’s Double Olive, 22027 Michigan Ave., as the nearly 100-year-old brick and mortar that holds the historic building together.

During any given moment when the pulsating music blares in the back room and the shimmers of a disco ball glow in the middle of the bar, other attractions are said to lurk in the shadows, coming out sometimes when they want to shake a tail feather or two. But one just has to wait, turn down the music a little and perhaps they can hear what the others have to say.

But the paranormal investigative team’s findings have confirmed what many at the bar already knew — they are not alone — but they don’t mind sharing the space.

Double Olive Manager Steven Guibord said although he has never had personal encounters with the spirits in his nearly three years at the Double Olive, which opened in 1996, his customers and employees have.

“In the hundreds of people that have come here and experienced it they said it is all good and nothing bad,” Guibord said. “It is kind of exciting. I don’t mind it at all.”

“Bottles moved, doors shut, lights go on and off, just nothing to be scared about,” Guibord said.

The mission of the Motor City Ghost Hunters’ visit to the Double Olive and other places was to drive away fears of the paranormal, their website said.

McCormick said after investigating his team found two spirits at the bar.

“One was a young lady and younger gentleman,” McCormick said. “We had made contact with the young lady physically through mediums with our team and she wanted to be crossed over, she was The paranormal team said they believe the two spirits, named James and Lynn, have a connection to the building.

The team believes James was a captain in the Army that served in Vietnam as a helicopter pilot; the investigators described Lynn as a barmaid whom James impregnated and had a fight with when she found out he was unfaithful to her, according to the Motor City Ghost Hunters website.

The team perceived this by channeling her spirit and by using several paranormal devices.

McCormick said that a lot of times when people die suddenly they cannot find the “light” to join their loved ones in heaven.

“So we step in and show people the way, we do that a lot for folks,” McCormick said. “We work for the white light, Jesus Christ. That is what we did and we tried to help them; the activity has cut down dramatically.”

Guibord said because the bar sits near train tracks, used by the Amtrack train station built 40 years ago south of Michigan Avenue and east of the Southfield Freeway, spirits are more prone to linger near because train tracks attract energy.

“There is an awful lot of history in this area and I think we have a lot of (paranormal) activity because I think it is an old historical area,” Guibord said. “So you are going to have a lot of wandering energies that are lost.”

The Commandant’s Quarters is the city’s oldest building in its original location.

Guibord said the area has a lot of history and it probably attracts a lot of spirits.

Guibord said that Motor City Ghost Hunters told him that the most activity located inside the bar is in the middle of the bar and in a separate lounge area, known as the Roomside.

On the Motor City Ghost Hunters’ website the paranormal investigative team chronicled its experiences. Team member Holly Shollenberger wrote that at 11:01 a.m. while using an electric voice phenomenon device, which helps the investigators hear spirits, her flashlight popped on while it was off, “something that has never happened before or since,” the website said.

While at the main bar, investigative team member Steve Shollenberger noted on the website that he heard a female voice that said “You looking at me?”

Similar events happened to other team members such as hearing voices, feeling the temperature change noticeably and experiencing the feeling of being tugged on.

On the website McCormick wrote that even though spirits are at the Double Olive they do not seem to be negative.

Whether the spirits move on or remain at the bar, Guibord doesn’t mind the company and neither do those who work or are regulars at the bar — but he said he sometimes minds if people make a fuss over nothing.

“When a body dies the energy doesn’t die” Guibord said. “The body might, but your soul doesn’t. Some people either believe in it or they don’t. But there is no reason why anybody should ever be scared by it.”