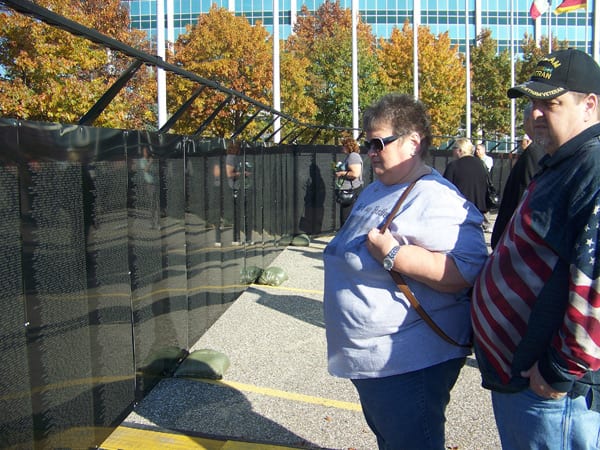 Photo by Sherri Kolade
During the Wall that Heals opening ceremony Oct. 25 Rose Gress (left) and her husband, Charles Gress, reflect on the memory of her brother Michael Troyan Jr., who died in the Vietnam War.

By SHERRI KOLADE
Times-Herald Newspapers
DEARBORN — With tear-stained eyes, Rose Gress stood near a massive granite wall, quietly remembering how her brother died for her country 43 years ago.

The Redford resident and hundreds of others attended the opening ceremony for the Wall That Heals, a traveling half-scale replica of the Vietnam Veterans Memorial in Washington, D.C., on Oct. 25 at Ford Motor Co. World Headquarters.

Gress said she often thinks of her brother.

“It is still really hard,” Gress said. “My brother, Michael Troyan Jr., has been gone for 43 years. It is sad seeing all these names. I know I cried when (U.S. troops) pulled out of Vietnam because I felt that my brother died for nothing.”

The names of more than 58,000 men and women who died during the Vietnam War are etched into the black granite wall. The monument honors more than three million Americans who served with the U.S. Armed Forces in the Vietnam War.

Mayor John O’Reilly Jr. said having the Wall in Dearborn is an honor.

“We continue to honor and embrace everyone who has ever served our country,” O’Reilly said during the opening ceremony. “We are so grateful in Dearborn and so honored to be the host for a second time for one of the most important memorials.”

The Vietnam Veterans Memorial in Washington, D.C., is celebrating its 30th anniversary. Dearborn hosted the replica 12 years ago.

organization established in 1979, to build the Vietnam Veterans Memorial in Washington, D.C.; the wall was dedicated on Nov. 13, 1982.

The Vietnam Veterans Memorial Fund unveiled the traveling exhibit on Veterans Day in 1996.

Since the Wall’s inception, more than two million people have visited the VVMF’s traveling exhibit.

“My nephew is in the Navy and my stepson is going to be joining the Navy,” Dancin said. “Obviously I don’t want to see all these people here on the wall but I don’t ever want to forget about (them). And I always thank God for keeping us safe.”

Ford Motor Credit CEO and Chairman Mike Bannister said the Wall is both a memorial and an educational display.

“(It) will awaken the memories for those of you who lived through the Vietnam Veteran era and no doubt it will tug at the heart strings of all of those who view it,” Bannister said. “We are honored to have the wall at our facility, have the opportunity to visit it and to pay our respect to those who made the ultimate sacrifice on our behalf.”

For more information go to www.cityofdearborn.org/thewallthatheals.