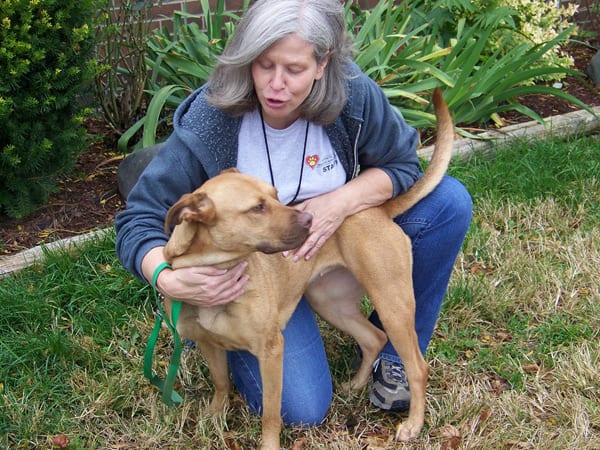 Photo by Sherri Kolade
Friends For the Dearborn Animal Shelter Volunteer Coordinator Irene Addison shows a little love to one of her favorite shelter animals, Mocha, a pit bull mix, in front of the shelter.

After participating in the 2012 American Society for the Prevention of Cruelty to Animals’ Rachel Ray $100K Challenge, 767 animals have new homes and the shelter earned a bit of cash in the process.

ASPCA and television personality Rachel Ray paired up for the third annual ASPCA challenge that encouraged shelters nationwide to adopt more animals this year than in 2011, and compete for a chance to win grants ranging from $5,000 to the $100,000 grand prize.

The ASPCA will give the prizes and grants to participants who adopted out the most animals.

From the ASPCA challenge, the Dearborn Animal Shelter won a $5,000 grant and a $1,000 scholarship to attend a Society of Animal Welfare Administrators 2012 Annual Conference in St. Petersburg, Fla., Wednesday.

The shelter — and its facility operator Friends For the Dearborn Animal Shelter — met its goal and then some by finding homes for nearly 800 animals during August, September and October. The shelter needed to adopt 300 more animals — they adopted a total of 355 — than they adopted during the same timeframe last year. The number of animals adopted also includes stray animals returned to their owners. Last year the animal shelter found homes for 412 animals.

Elaine Greene, executive director of the FFDAS, said the point of the ASPCA challenge, that ended Oct. 31, was to not only adopt animals, but to find new ways to market adoption opportunities.

“This is the first time the Dearborn Animal Shelter entered into the contest and winning the grant is icing on the cake,” Greene said. “We are thrilled that we were able to save 300-plus more animals. It is a great accomplishment and came with a lot of hard work. We really appreciate how the community helped us in this endeavor, without them we wouldn’t have been able to place the animals.”

In April, ASPCA challenge officials selected the top 50 nationwide shelters based on a Facebook voting poll.

Greene said her staff signed up for the challenge after finding out about it via email.

“As soon as they saw (the email) they said, ‘Oh, we should do this,’” Greene said. “So we said this is a good exercise for us to learn how to do things differently and get the animals out quicker.”

FFDAS Volunteer Coordinator Irene Addison, who will represent the shelter at the convention, said she is excited about the convention networking opportunities.

“I am so excited about opportunities to network with other organizations and learn what they did so we can borrow their good ideas and apply it to our future adoption events,” Addison said. “Our goal is always to adopt animals into a great home as quickly as possibly.”

Addison said to reach the adoption goal, FFDAS had to come up with creative — and traditional — ideas for adopting animals.

“We’ve been forced to go outside of our comfort zone in the way we do a lot of our adoptions,” Addison said. “We tried a number of larger adoption events and have gotten very good at marketing our events to bring people in. We are rejoicing at that accomplishment of getting that many more animals into homes this year.”