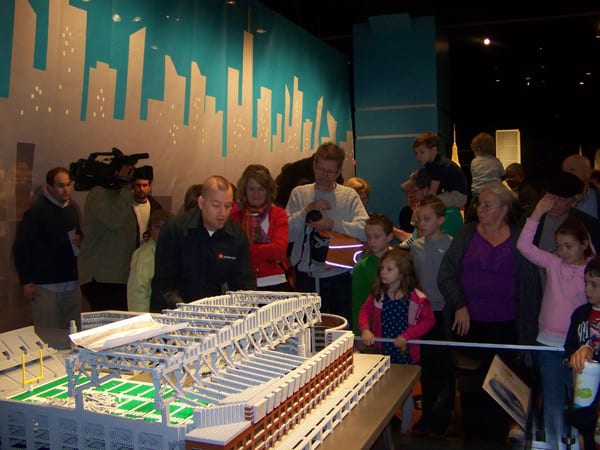 Chicago-based Lego Architectural Artist Adam Reed Tucker is no stranger to mixing business with pleasure — and he incorporated both his passions into a featured exhibition “Lego Architecture: Towering Ambition” at the Henry Ford Museum, developed by the National Building Museum in Washington, D.C., held at the Flex Gallery through February 24.

Some of the sculptures reach up to 18 feet high and use as many as 450,000 pieces without adhesives.

“I was motivated and inspired by 9/11 events,” Tucker said. “I noticed a lot of people backing out of leases from tall skyscrapers and tourists no longer visited observation decks. I thought it would be interesting to recreate these models in a way that people can understand them.”

Tucker said he chose Lego bricks as a medium because they epitomized playfulness and whimsy.

“That type of element is not typically thought of outside as a toy and architecture is kind of intimidating,” Tucker said. “My deeper understanding of engineering and construction in architecture gave (my project) a genuine quality. It legitimizes it.”

Tucker started creating his sculptures with Lego bricks in 2003. He chooses which buildings to replicate based on his interest, location and passion.

“Living in Chicago made sense because I could go out and study buildings in person,” Tucker said. “I started selecting interesting buildings around the world because I thought they would translate well out of Lego brick.”

“(This) exhibition takes a more artistic look at Legos,” Varitek said. “It is very inventive with not only beautiful buildings, but we have a chance for young people to come in and be inspired and build themselves.”

“It is youthful to look at with a cool design to it,” Varitek said. “That makes it OK for adults to come look at what is essentially a kid’s toy.”

Child’s play or not, husband and wife Daniel Blazewicz and Sam Blazewicz of Toledo drove about an hour with other family members to visit the Lego exhibition, which did not disappoint, the couple said.

Sam Blazewicz said she and her husband collect Lego kits and seeing the exhibition in person was an eye-opening experience.

“It is really cool to see them,” Sam Blazewicz said. “The Lego pieces are just like (our own) but a much smaller scale.”

“I am really impressed by the detail and the scale is far greater than I expected,” Daniel Blazewicz said of the exhibition.

After visiting the exhibition, he said he might open up his own Lego pieces and start building.

“I may some day build them,” Daniel Blazewicz said. “But I like them nice and still in the original packages.”

For more information about the Lego exhibition or upcoming Lego events go to www.thehenryford.org/events/legoArchitecture.aspx or call The Henry Ford at 313-982-6001.