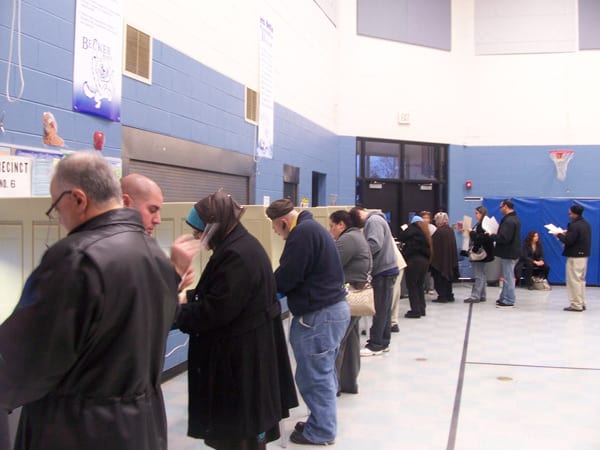 Photo by Sherri Kolade
Dearborn voters waited in long lines for hours at some polling places to cast their ballots Nov. 6. Residents vote at the Iris Becker Elementary School gymnasium about 5:30 p.m.

Salamey and Wygonik did not return phone calls by press time.

Mosallam said he is humbled to win one of the seats.

“I’m truly honored to be elected statewide,” Mosallam said. “I stated that if I win we all win in Dearborn, Downriver and metro Detroit.”

Mosallam, a Fordson High School and MSU alumnus, said as an MSU trustee, he wants to create policies that lower tuition and encourage diversity among students.

“I hope to really make an impact to make sure our kids in this area are repsresetned at MSU,” Mosallam said. “I am a son of Dearborn and I always will be.”

On the local ballot, Dearborn voters elected incumbents Aimee Blackburn and Mary Lane for spots on the Dearborn Public Schools Board of Education, six-year terms that expire Dec. 31, 2018.

She works in financial risk management at TRW Automotive in Livonia.

Lane also will serve her fourth term on the school board. She received her bachelor’s and master’s degrees from the University of Michigan and received post-graduate training in immigration law and English as a Second Language.

In Dearborn Heights, Crestwood School District Board candidate Diane Ward beat out Zaineb Hussein 6,328 votes to 3,379 for a two-year term that expires on Dec. 31, 2014.

Ward has lived in the district for the past two decades. She has helped with fundraising events at Riverside Middle School and volunteered as a parent chaperone at school-related events. She started the Patrons of the Crestwood Drama Club, a booster organization for the district’s Drama Club, and belongs to other clubs and organizations.

Dearborn Heights City Councilman Joseph Kosinski beat out candidate Lisa Farrens 8,831 to 6,539 for a partial term that expires on Dec. 31, 2013.

Kosinski won the seat with a 4-2 vote, beating out opponent Farrens. That term is scheduled to end this year.

Kosinski received a bachelor’s degree in marketing from the University of Detroit. He began his public service career as vice chairman on the Zoning Board of Appeals in 1973 and from 1996 to 1999 was the city council chairman.

Kosinski attributed winning the election to his involvement in the community.

“There is name recognition when you are involved in various activities in community,” Kosinski said. “Giving back to the community has done me well.”

Kosinski said as a councilman he wants to support the community in any way he can.

Westwood School Board candidate winners include Cheryl Bell-Everett who won one of two six-year seats with 3,660 votes. Roderick Means received 2,441 votes. The terms expire on Dec. 31, 2018.

Dearborn City Clerk Kathleen Buda said the polling lines were not unusually long in comparison to the 2008 election.

“I was making my rounds and I voted at Miller School and I only had to wait 15 minutes,” Buda said. “I know there were lines elsewhere, but the lines were moving at a significant pace.”

Buda said she thought the lines were indicative of a larger voter turnout, but that wasn’t the case. In 2008, about 70 percent of Dearborn residents voted, this year about 65 percent of voters turned out to vote.

The following are the federal and state, county and district candidates from the general election ballot.

(The 15th District covers most of Dearborn and several other southeastern Michigan communities.)

(The 12th District covers parts of Wayne and Washtenaw counties, and all of Monroe County. It includes west Dearborn, Dearborn Heights, Taylor, Romulus and Inkster.)