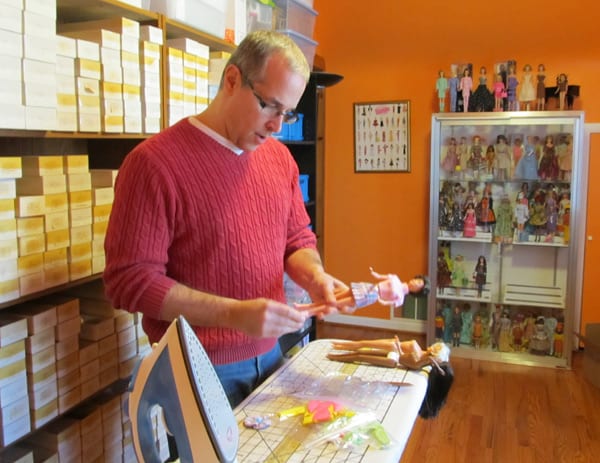 “I’m a huge Christmas fan – I’m just a kid at heart,” Bruce said. “Our club embraced it instantly … (it’s) recycling at its finest … putting something beautiful back into the hands of a child who might otherwise have nothing; (we have) tremendous enthusiasm for that.”

The Great Lakes Doll Club, founded in 1982 by adult fashion doll collectors, meets monthly at the Salvation Army Offices in Warren. The Grant-A-Wish sub-group raises money for charities through an annual mini-convention featuring convention gifts, a limited edition doll, special guest speakers, a charity auction, and a raffle room. Bruce said they have given away over $100,000 to local charities. This year’s convention will be held April 20 and 21 at the Livonia Marriott.

About eight years ago the GAW sub-group applied to dress Goodfellow dolls as a holiday project, but when they were turned down because the group had enough volunteers, they decided to dress fashion dolls on their own instead.

The first three years they donated the dolls to children’s homes until they realized it made more sense to have the Salvation Army, where they were already meeting, distribute the dolls to children in need. This year GAW members repurposed and restored 249 Barbie dolls. Bruce said in past years they have restored as many as 380 of the fashion dolls.

The first step each year is to collect as many secondhand Mattel Barbie dolls as they can find at garage sales and thrift stores for $1 or less per doll.

Bruce said they use Mattel dolls because of their high quality: the doll body and hair can withstand cleaning and refurbishing. They also look for Barbie dolls with uncut hair, and hands and feet free from chew marks. They also avoid doll bodies with ink and magic marker drawing on them.

At the end of the summer, in September, Bruce said they hold what they call their “spa day” at his house to refurbish the dolls.

The first step is to peel off the old clothing from the Barbie dolls. Then they go through a hair detangling process with sturdy combs until it become smooth again. After hair detangling, the dolls go to sink stations. First volunteers use toothbrushes to scrub the fashion dolls with dishwashing soap until the doll body is completely clean.

Then they shampoo and condition the doll hair just like human hair. After drying the dolls, they brush out the doll’s hair again.

Once the Barbie dolls are dry, they are stacked about a hundred to a bin. Club member Mary Drexler originally doubted that she had the skills needed to help refurbish Barbie dolls, but she found that Bruce taught the volunteers the skills they need.

“I found the only requirements were commitment, love of dolls and time,” Drexler said.

Next, the dolls go to a club meeting for “adoption day.” Bruce said each club member takes as many dolls for which they can afford to buy or make new clothes.

“Some of our really talented people will make the clothes,” Bruce said. “We have a lot of people who sell clothing for the dolls, so they’ll just take from their stash and dress them with these beautiful, one-of-a-kinds that they have made.”

He said some members take a dozen dolls to dress, and most take at least five or six dolls home to clothe.

“You add little touches – does the doll’s hair need to be braided or pony-tailed, or given an up-do, which you can put ribbons in the hair?” Bruce said. “The dolls are just exquisite when they come back; you would never know they weren’t brand new.”

Then in November, they hold a “boxing day.” The group prints pink boxes to accommodate the doll, with their logo on it that says “A gift from the Great Lakes Doll Club.”

Stations of team members quickly accomplish the packaging. After boxing the dolls, they add accessories and hairbrushes. Then a team member primps the box contents before sealing the dolls in the boxes.

Bruce said the dolls find homes through the Salvation Army with girls in need throughout Southeastern Michigan, and they hope they play with the Barbie dolls.

“The children that we give them to we absolutely intend that they are going to take that out of that box and play with it,” Bruce said. “It is entirely for playing and role-playing. It is a wonderful rehearsal tool for children because you act out in a completely non-threatening way situations that you are going to encounter as you become older. Am I going to go on a date, am I going to interview for a job, am I going to have a career in this field? And that’s what it was always intended to be from day one… it’s definitely meant for creative play.”

The project has become an annual tradition and has worked well for them, Bruce said, adding that they will probably never stop doing it.

“It’s really cool when you see it all in action on that (boxing) day in November,” Bruce said. “It really looks like Santa’s workshop with the stuff being moved from table to table.”

He said he spends 20 to 30 hours on the dolls he personally restores for the project. Because he professionally designs and sells the Barbie doll clothes that he makes, he sometimes puts his original creations on the dolls he refurbishes and donates.

“It is fun because people in my club will look at it go by… and they’re like ‘I want that one!’” Bruce said.

For more information about the club, go to www.gawfund.org. To donate Mattel Barbie dolls, contact Bruce at [email protected]