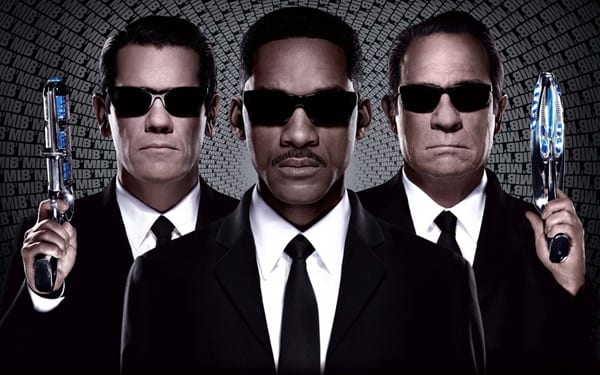 Josh Brolin, Will Smith and Tommy Lee Jones in “Men in Black 3”

PICKS OF THE WEEK
“Men in Black 3” (PG-13) — This third installment about agents policing the secret world of space-alien immigration adds a twist with time travel — and it’s still watchable! Agent J (Will Smith) loses track of his partner, tight-lipped Agent K (Tommy Lee Jones.) The Men In Black HQ says K has been dead for more than 40 years. Agent J has to travel back in time and team up with the young K (Josh Brolin) to stop an alien assassin.

Don’t worry, it’s better than MiB 2. Brolin’s performance as a 29-year-old Tommy Lee Jones (Brolin is in his 40s) is the highlight of the movie. The villain, Boris the Animal, is played by comedian Jemaine Clement, who dons a perfectly over-the-top persona instead of his usual dry humor. It may not recapture the magic of the original, but this “threequel” is worth a watch.

“ParaNorman” (PG) — Norman is an outsider with a bully problem and a supernatural gift. When zombies and ghosts terrorize his tiny town, the hapless citizens can turn to only one person, Norman, the weird little kid who says he speaks with the dead. With the help of his only friend, his annoying sister, a brain-dead jock and the local bully, Norman has to fight a witch’s curse to save the town.

It’s a lot of fun and a lot spookier than you would expect. It’s all done in 3D stop-motion animation by the same company that made the creepy “Coraline.” Adults as well as young’uns will be plenty entertained, provided everyone is at least 7 years old and can handle a scary and emotionally weighty finale.

“Lawless” (R) — In the hills of Virginia, the Bondurant brothers were legendary Prohibition-era outlaws. This movie takes the facts and tries to pull out a gritty, dramatic, visually stunning crime drama. It almost succeeds. The cast is fantastic: Tom Hardy as an outlaw older brother, Jessica Chastain is a strong woman drawn to the wrong men, Gary Oldman is the infamous Floyd Banner, and Guy Pearce is the chilling federal investigator come to shut the brothers down. The film has a healthy dose of violence, matching pound for pound what it has in acting talent.

“Step Up Revolution” (PG-13) — The greedy corporatists are about to bulldoze a beloved working-class neighborhood, and only a diverse team of young dancers can save the community center, with their dancing. It’s a plot as old and predictable as “war veteran loses his family, then kills all the bad guys,” floated along only by its action thrills (or in “Step Up’s” case, dance numbers). The dancing is fine and flashy, but it’s not worth the soulless exchanges in between that pass for “drama.”