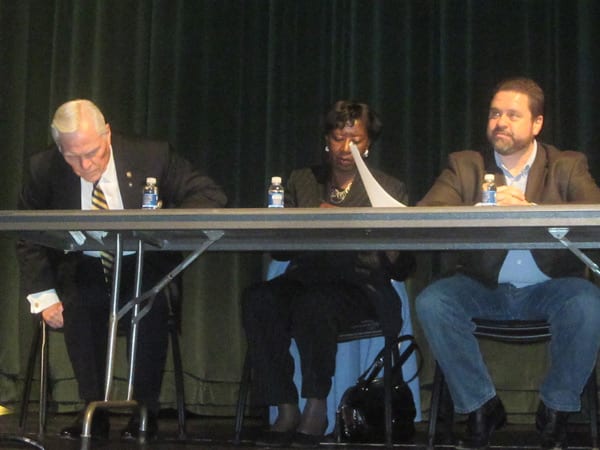 By ANDREA POTEET
Sunday Times Newspapers
ALLEN PARK — A plan to right the city’s struggling finances is forthcoming, but will take cooperation and input from its residents.

That was the message the city’s new emergency financial manager, Joyce Parker, relayed during her first Town Hall meeting Tuesday.

Appointed to the city Oct. 29, Parker said she is in the process of evaluating the city’s finances to formulate a plan to overcome its $6 million deficit; the state treasury gives her 90 days to do so.

“The plan then will dictate to some extent what the timeline is,” Parker said. “A big part of it really depends on the complexity of the issues I will be faced with and the community will be faced with to get the job done … under the agreement with the state, I will be here until the job is done.”

Before she formulates her plan, Parker is seeking resident input. She passed out a survey to those in attendance with questions ranging from which services or departments should receive cuts, strategies for streamlining health care costs, and ideas for the development of the former studio property. Parker plans to make the survey available on the city’s website .

During her presentation, Parker listed powers of the EFM under Public Act 72 and money-saving steps she spearheaded in other cities, such as Ecorse, where her EFM duties are coming to an end. There, she saved more than $2 million for the city by ending a contract with Michigan Municipal Service for public works services.

In Allen Park, Parker said she plans to look at all options, including auxiliary and volunteer police and fire departments; a renewal of an expired agreement with the developer of Fairlane Green shopping center, commonly known as “The Hill,” to share costs of policing that area; and the sale of the former studio property while maintaining an interest in the type of development built there.

The studio property sale is a “major piece of the puzzle,” Parker said.

The meeting also included updates from CRBE, the real estate firm hired in September, and working on a marketing plan for the movie studio property; Grand Sakwa, which plans to start construction in early 2013 on a Wal-Mart near the former Farmer Jack property straddling Allen Park and Lincoln Park; and Temple Entertainment Corp., which recently took over management of the city-owned community center and plans to kick off more community events, including the return of the Mayor’s Ball and a holiday market, soon.

Parker said though her plans have not been finalized, they will be made available to the public as soon as they are complete.

“My goal is not to dismantle a community,” she said. “My goal is to provide quality services in a cost effective matter. As part of that, I do think you have to look at creative ways to get the job done.”