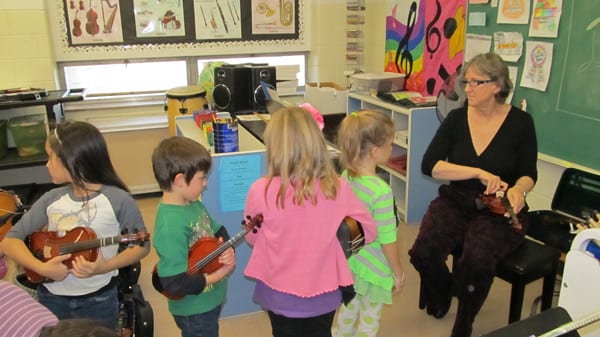 Photo by Sue Suchyta
Dawn Swartz (right) of Ann Arbor tunes violins for students before a Suzuki violin method class she teaches to first-graders during an after-school enrichment program at Clarence Randall Elementary School in Taylor.

“It’s not really that scary to be on stage with lots of people looking at you,” Sochocki said. “It really is fun doing it.”

The after-school drama program Sochoski joined, the Randall Players, open to third-, fourth- and fifth-grade students, and one of many after-school enrichment programs the school offers, made it easier for them to speak in front of a group and work with others, third-grade teacher and drama coach Donna Cahalan said.

“You will see students who are shy in the classroom kind of come out of their shell as they are part of a team, part of a production,” Cahalan said.

Fifth-grader Eric Burton, 11, who also acted in last year’s play, said he is braver speaking in front of a classroom of his peers.

Burton said he plans to try out for a lead role in the play this year, and he will encourage friends to join the Randall Players.

He says public speaking is fun.

“You get to be up on stage and be in front of all your friends,” Burton said.

Cahalan said when students worked in a group to write the script, it sharpened their reading, writing and revision skills, as well as their ability to work in a team. They work three days a week for up to two hours after school.

“We are really working on teamwork at our school,” Cahalan said. “And that in itself is a huge part of Randall Players, the fact that they are able to work together as a team and when there’s a conflict that arises, they’re able to handle it themselves as they work through the play-writing process.”

“They just blossom into ‘Wow, I can’t believe they’re actually up there doing that,’” Patts said. “Maybe this is the talent that they have hidden inside or something.”

Principal Cindy Meszaros said that when students participate in after-school activities and feel like they belong, they feel like they are an important part of the school.

She said the Randall Players program teaches them to write, edit and perform a play from beginning to end, make the decorations and design the props. She added that it also addresses speaking and listening.

Meszaros said they have math tutoring and chess clubs that help students develop problem-solving skills, and a mileage club where students count the number of steps they take after school to develop their math skills in the after-school program.

“So not only do we use it to build community, we use it to address the academic needs of our students,” Meszaros said.

Kelly Mitroka, one of two student council teacher advisors, said she likes to see students become involved, and the joy that they experience from accomplishing a task, such as helping those in need or improving the school facility.

She said being in a leadership position challenges student council representatives to go outside their comfort zone and to take ownership of school projects, like recycling, or introduce new students from their classroom to the other adults in the school, which helps them develop their communication skills.

Past fundraising projects include Halloween trick or treating for the United Nations International Children’s Emergency Fund to change collecting, called “Jingle All The Way” for the Taylor Reading Corp, Prunty said.

She said the project lets students help other children while they develop valuable public speaking and communication skills, including speech writing.

“They feel very proud to be a member of Beta Club,” Prunty said. “Their confidence just goes so up… in my head it’s the first step of them being givers, and they see themselves as givers, rather than just always getting things. They can see that there is a way for them to help other people in need.”

Patts said other after-school activities include – but are not limited to – a beginning and advanced hand chimes group; the Fur Angels – where children read to therapeutic dogs in a non-threatening environment and build reading skills, and the Reading Patch club, which allows students to check out extra books and earn patches for meeting reading goals.

She said fourth-grade students learn about science hands-on and off-site through Experenca and Earthworks.

Dawn Swartz teaches violin to kindergarten and first-graders after school using the Suzuki method, which she said teaches ear learning before eye learning. She said she sees her students acquire confidence.

“Studies show that their minds become more organized in the fields of mathematics and language because music is a language,” Swartz said. “And they’re learning a second language… in addition to English, and that improves the brain.”

She said she hopes the children find a joy in music.

“It that’s accomplished, then my job is well done,” Swartz said.