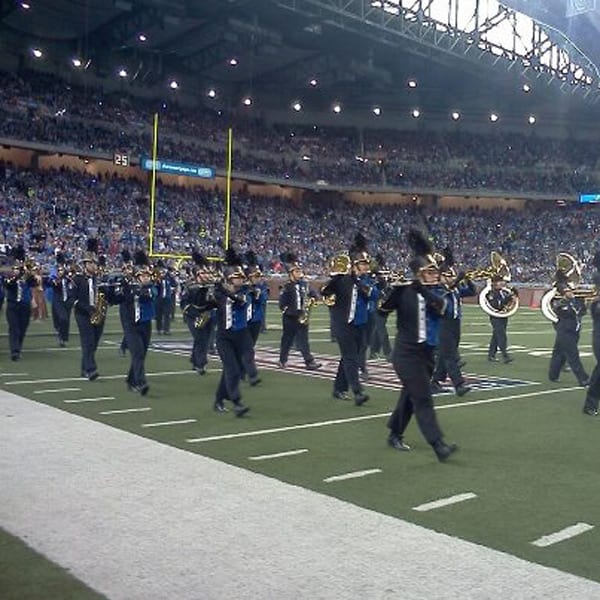 Photo courtesy of Wyandotte Public Schools
The Wyandotte Marching Chiefs head onto the turf at Ford Field during their halftime performance with Kid Rock on Thanksgiving.

WYANDOTTE — Days after a high-profile performance with Kid Rock during his halftime show for the Detroit Lions Thanksgiving day game at Ford Field, the Wayndotte Marching Chiefs got another suprise.

Kid Rock sent a letter to the band Nov. 24 offering to cover $2,500 in unexpected bus expenses the band incurred traveling to Ford Field for practice and the performance after reading about the expenses in an online publication.

Band Director Mark D’Angelo said the money, which completely covered the expenses, was a thrill, considering the travel expenses were not in the band’s budget.

“These rehearsal trips and performance in Detroit were not something that we planned on,” D’Angelo said. “It is really a great relief knowing that we don’t have to eliminate other trips because of the decision to accept this once-in-a-lifetime performance.”

The band was the only band invited to play during the halftime show and had a few days to prepare a short routine and learn Kid Rock’s new song, “Detroit, Michigan” for the performance.

“The music to be performed was finalized by the show producers and I stayed up all night long preparing an arrangement that our band could start working on the next day,” D’Angelo said.

Senior and Drumline Section Leader Garrett Waggoner said, “That is just about the hardest thing I have ever had to do.”

D’Angelo said he’s proud of the hard work his students put in for the performance.

“There is no way to explain the thrill of performing in front of so many people” he said. “I am really happy that my students were able to have this opportunity.”