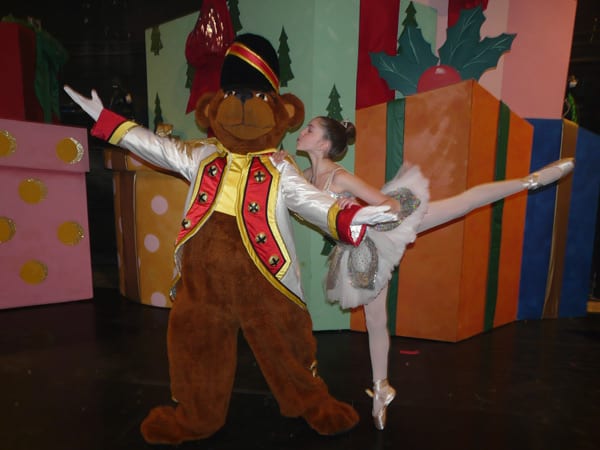 Photo by Cheryl Portale Sibole
Dearborn Heights resident Sarah Sibole, a 13-year-old eighth-grader at Dearborn Divine Child School, plays Clara in a scene from the Nutcracker with the “Radio City Christmas Spectacular” through Dec. 24 at the Grand Ole Opry House in Nashville. She is one of two girls who play the role.

By SUE SUCHYTA
Theater brings favorite stories to life, and during the holidays there’s even more magic in the air as Nutcrackers come to life, other worlds await beyond the rainbow, and guardian angels grant wishes.

Sibole auditioned in New York City in May, where she made the final cut, and her mother received a call July 10 that her daughter would again share the role of Clara in a scene from “The Nutcracker” in the Nashville production. She also appears in the Living Nativity scene.

Sarah Sibole and her mother, Cheryl Portale Sibole, traveled to Myrtle Beach Oct. 30 for a week of rehearsals, followed by a week of technical rehearsals on the stage of the Grand Ole Opry House.

Again this year Sibole played Clara on opening night, which was on Nov. 16. When her counterpart plays Clara in a performance, Sarah is on standby backstage. She shares a dressing room and a tutoring room backstage with her counterpart.

She said her tutor is with her at least 15 hours a week, usually for five hours three days a week, and her homework assignments are on Divine Child’s school website. She said she gets a lot of work done when there are only two students in the class.

Sibole said she is always slightly nervous just before she goes onstage for a performance, but otherwise feels excited.

“When I am onstage the nervousness goes away and it is nothing but excitement,” Sibole said. “I love seeing the faces of all the children in the audience when they watch me dancing with the ‘Nutcracker’ characters.”

Her mother also loves to watch the reactions of the children in the audience when Sarah dances, because she remembers when Sarah was among them in the house, watching the dancers onstage in amazement.

“Every time I see Sarah on the stage I get a lump in my throat and tears in my eyes,” her mother said. “I love seeing her face beaming with pride and expressing her love of dance.”

Sarah Sibole said being cast in the role of Clara for a second year is a dream come true.

“I love every second of it,” Sibole said. “And hopefully the audience can feel that emotion when I dance.”

When she is home she studies dance at the Noretta Dunworth School of Dance in Dearborn, and said she loves to dance because she excels at it, and it makes her feel free.

“When I’m on stage, even though there can be hundreds of eyes on me, I feel like it’s just me,” she said. “I feel that I can express myself the best through dance. Plus it is the most fun way to exercise.”

She said she maintains her energy by getting plenty of sleep each night, eating a breakfast full of protein and snacking on fresh vegetables. She does admit, though, that she has a weakness for Oreo cookies.

Sibole said her dream is to become a Rockette and to dance in other shows on Broadway. Once she turns 14 she plans to attend the Rockette summer intensive sessions. She also plans to begin taking voice lessons to help with future auditions.

When she is no longer able to dance on Broadway, Sibole said she would like to study medicine and become a doctor.

She advises other aspiring young dancers to take as many dance classes and intensives as they can, and to practice as much as possible.

“Practice doesn’t make perfect, but it gets you pretty darn close,” Sibole said.

DOWNRIVER ACTORS GUILD DOES ‘THE WIZARD OF OZ’ YOUTH PRODUCTION
Get ready to go over the rainbow with Dorothy as the Downriver Actors Guild presents its youth theater production of “The Wizard of Oz.”

The Downriver Actors Guild performs in the Out-of-the-Box Theatre Complex at 1165 Ford Ave. in Wyandotte. For more information, call 313-303-5269 or go to www.downriveractorsguild.net.

Directed by Debbie Aue, with choreography by Peyton Bias and musical direction by Wendy Fichter, the family-friendly show features 60 youth age 3 to 17 from the Downriver area.

A Downriver Actors Guild member said the group will use stage magic to create the illusion of a “live” tornado and flying monkeys.

The cast includes Kayla Nagy as Dorothy, Caitlin Keif as Ms. Gulch and the Wicked Witch, and Hannah Szalay as Auntie Em and Glinda.

Bethany Fink plays Huck and the Scarecrow, Mitchell Sturm plays Hickory and the Tin Man, and Jacob Partrich plays Zeke and the Lion.

Alex Rosen plays Uncle Henry, as well as an Ozian guard, a crow, a jitterbug and a Winkie, and Christian Hutter plays Professor Marvel and the Wizard of Oz.

DEARBORN HIGH SCHOOL ANNOUNCES ‘BEAUTY AND THE BEAST’ CAST
Dearborn High School Theater Director Gregory Viscomi announced the cast for the school’s spring musical, “Beauty and the Beast,” which will run March 21 to 24 at the school, 19501 W. Outer Drive.

Westley Montgomery plays the Beast, with Katie Polidori and Christina Pizzimenti sharing the role of Belle.

Other double cast roles include Nader Berry and Kyle Tillman as Gaston, Anthony Cieri and James Polidori as LeFou, and Jordan DiGregorio and Vicky Johnson as Babette.

Carmelle Atkins is vocal director, and Jenny McPherson will choreograph the production.