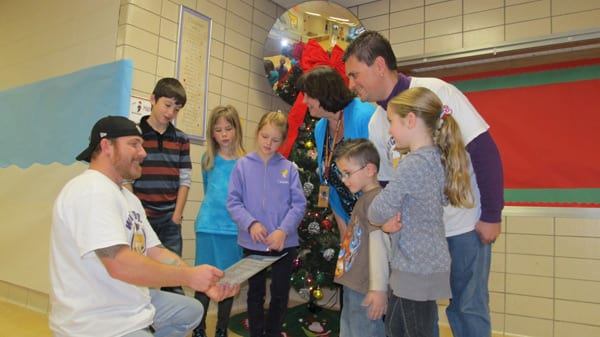 By SUE SUCHYTA
Sunday Times Newspapers
RIVERVIEW – Fourth-grader Eric Cartwright, 9, said he is glad volunteer Watch D.O.G.S. help his school and are ready to listen when he is having a rough day.

“Watch D.O.G.S. helps people if they get in trouble or something – they can talk about it,” Cartwright said. “They help the school stay safe… they’re always there for you.”

Watch D.O.G.S., Dads of Great Students, are students’ adult male relatives who volunteer to help students and teachers with the learning process, reduce bullying and improve the safety and security of the school.

The initiative, founded in 1998 by the National Center for Fathering, has spread to more than 2,276 schools in 41 states.

Memorial principal Nancy Holloway discovered the program last year during a visit to the Las Vegas elementary school where her daughter teaches. By March, she held the first volunteer meeting at Memorial.

After volunteer Luke Gayer, a former steelworker, experienced a career-ending injury, he said he needed something to do, and finds volunteering at the school to be a good use of his time.

“The teachers have their hands full, so we’re here like an extra eye, (or) an extra hand,” Gayer said.

Holloway said her job is so much easier now that the Watch D.O.G.S. can mediate playground quarrels – she does not have a long line of issues to arbitrate outside her office after recess.

Having positive male role models in the school is also important, Holloway said, because some students do not have them in their lives. In addition to dads, she said uncles and grandfathers volunteer at the school.

Holloway said all volunteers at the school go through a screening process, in keeping with district policy, and Watch D.O.G.S. receive training at both a meeting and on-the-job from experienced volunteers.

She said they started with eight volunteers last year and have close to 90 Watch D.O.G.S. now. Some volunteer once a year, using vacation time, while others volunteer several times a week.

Filkins said one of the hurdles they overcome is the uncertainty of volunteer dads who feel they will not know what to do.

He adds that fathers gain from the program as they spend school time with their children and get to know their children’s friends and other fathers.

Filkins said it also makes a huge difference for the kids who do not have male role models in their life.

His first day at Memorial as one of the Watch D.O.G.S., Filkins said he helped a child who was having a tough day.

“I told him, ‘Do you want to be the very first kid to take a Watch D.O.G. for a walk?’” Filkins said. “We walked down the hallways and we talked a little bit… and at the end of the day the teacher… said that was the best day he’s had in a long, long time — and that’s the ‘aha’ moment.”

Gayer said his charm lets him come down to the child’s level, but still be a role model to them; he helps them understand when it is time to be serious and not mess around.

He finds it gratifying that teachers will ask them to talk with certain children, and that the children respect them enough to confide in them.

“That part’s really cool because you could have changed their whole day or their week or even their year,” Gayer said. “You have no idea what effect you have on kids.”

Holloway said that mothers have always been involved at the school.

“Those roles are kind of morphing into something new, which I think is great, because kids are able to see mom as a breadwinner and dad being involved here at the school,” Holloway said.

Holloway added that Watch D.O.G.S.’ help in the parking lot is invaluable, since the lot, built in 1955, is a staff parking lot, designed when most children walked to school. Now, she said, 60 percent of the students attend through the “schools of choice” option, and 75 to 80 percent of students get a ride to school.

“That creates a nightmare, and having our Watch D.O.G.S. out there to open the (car) doors, help the kids out of the cars and send them on their way keeps it running smoothly,” Holloway said. “We had a lot of parents who would sit out there and not move until the bell rings.”

Gayer said he helped a student who was uncomfortable reading aloud in class by relating his own fear of reading aloud as a child, and sharing how he overcame his fear. He was touched to see the student overcome his fear and volunteer to read first in front of the class.

“I thought that was really cool,” Gayer said. “It almost tears me up in a way because I had that effect on him; I changed his way of thinking… He might not have been the best at reading or writing but that fear he had was gone.”

Filkins encourages fathers to volunteer with the Watch D.O.G.S. program at least once.

He said some fathers who volunteer take vacation days; shift workers will volunteer for half a day, then go home to sleep.

He recalls seeing Holloway deeply moved by the crowd of men at one of Memorial’s initial Watch D.O.G.S. meetings.

“She said, ‘Shawn, I’ve never seen 80 percent of these guys,’” Filkins said. “That to me is why this program should be in every elementary school in the state… the benefits are so amazing that once they do it, they are going to try to figure out a way to do it again.”