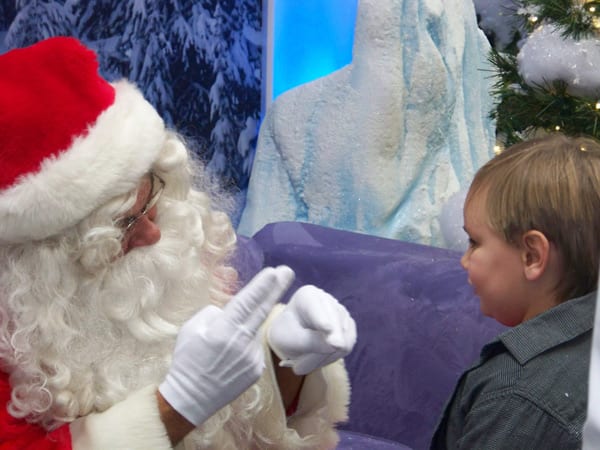 The Ralph J. Bunche Academy student, however, did not use words; she signed a message to Santa.

Tate, who is deaf, sat on Santa’s lap during the mall’s first signing Santa event for about 75 area deaf and hearing impaired students from Ralph J. Bunche Academy in Detroit and the Michigan School for the Deaf in Flint.

Forbes said he has childhood memories of his parents singing Christmas songs to him and he wanted to give something special to the students.

“It is really nice to be here today to share those memories with these other kids,” Forbes said through an interpreter.

Tate was all smiles after playing around inside the Ice Palace, a 30-foot ice dome with falling artificial snow, which nearly covered the girls’ pigtails and clothes.

Tate said through her mother and interpreter that she has visited a signing Santa a few times before in the last few years.

“I like being here,” she signed to her mother. “I know it is going to be Christmas soon.”

Tate’s mother, Khadija Anderson, of Detroit, said she is glad to have a Santa who can speak to her daughter in a way the she understands.

“I’m excited for her,” Anderson said, “especially since Santa can sign for her.”

“It was probably more exciting for us than the kids,” O’Malley said, “just to see their expressions and enjoy and really relate to it. It is one of those experiences that you just don’t get to share everyday.”

Black, who also is deaf, said through an interpreter his sons — from six months old to 4 years old — have never seen a signing Santa before.

Black said seeing his children sit on Santa’s lap for a picture was a special moment for the children.

“I was excited because that was the first time a Santa has ever signed to me and them,” Black said.