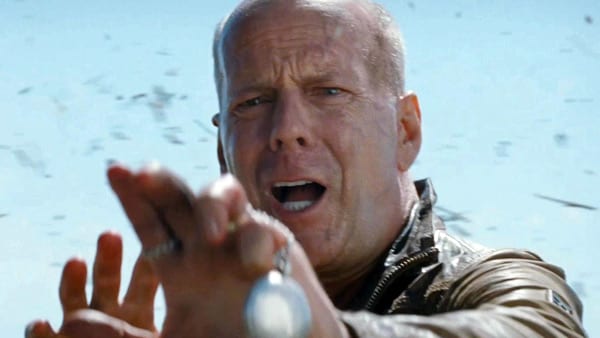 PICKS OF THE WEEK
“Looper” (R) — Joe (Joseph Gordon-Levitt) has a good job as one of the hit men who hang out in the year 2044, waiting for the future-mob to send victims back in time for execution. It all changes the day his future-self (Bruce Willis) is sent back. Young Joe hesitates on the trigger, and old Joe escapes. Now the young Joe has to murder himself from 30 years in the future, or be murdered as a young man by his angry boss.

This is an action thriller with enough sense to keep things moving at a brisk and tense pace. Although super-nerds may be let down by the lack of meticulous exposition about time travel, “Looper” keeps the rest of us reeled in and skillfully plays on the deeper themes in the story.

“Something Better Somewhere Else” (R) — This collection of four short films shows just how much storytelling can be done in a small amount of time with relatively little said aloud. The four shorts have a similar theme of “things about to change.” One follows a man leaving a job he hates, and the subtle developments that turn up during a farewell round of drinks. Each one has great strength in the details. The stories are short, subtle and satisfying. It’s a refreshing change of pace from bloated Hollywood productions and hyperactive attention-grabbing media.

“The Well Digger’s Daughter” (NR) — This remake of a French melodrama has the look and feel of a dear family antique — pretty, old-fashioned and a bit stuffy. The titular daughter, Patricia (Astrid Berges-Frisbey, looking like an idyllic painting come to life), is gorgeous and cultured, despite her working-class background. She apparently does a lot of strolling through fields of flowers near dusty country roads. She falls in love with the handsome son of a local rich man. He flies a biplane and takes her on his motorcycle. Their love has to struggle against class barriers and World War I.

DOG OF THE WEEK
“The Words” (PG-13) — Behold, a story so pretentious and unmoving that the studio, in its mercy, decided to quietly release the DVD on Christmas Eve. The movie centers on Bradley Cooper’s character, who is a writer in a story within a story being told by Dennis Quaid. Jeremy Irons shows up in Cooper’s storyline, and tells a quick story-within-a-story-within-a-story.

The movie beats you over the head with messages about plagiarism, fictional worlds, guilt and all kinds of things that just go nowhere. The story gets so wrapped up in itself with so little to say that you wouldn’t mind a little plagiarism, so long as it’s interesting.