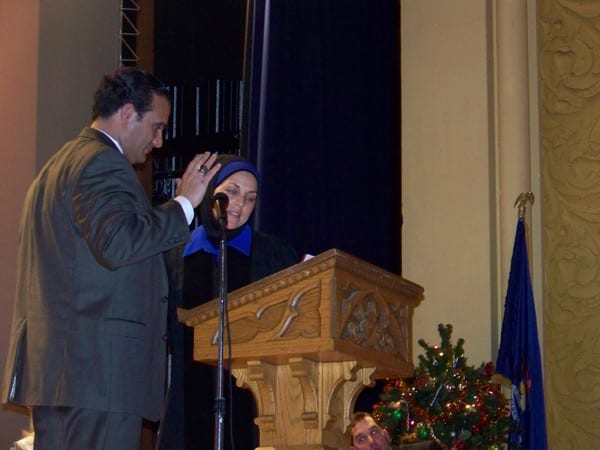 “I am humbled and honored to take this oath of office to serve the citizens of this great state as trustee of MSU,” Mosallam said. “It is a dream come true.”

During the general election, Mosallam won one of two MSU trustee seats with 1,777,008 statewide votes; Joel Ferguson won the other trustee seat with 2,031,491 votes.

Mosallam will serve his term from Jan. 1, 2013 to Jan. 1, 2021. An MSU trustee has supervision over the university and university funds without pay.

During the ceremony, Fordson High School Principal Youssef Mosallam (no relation) said Brian Mosallam is a great example of a Fordson graduate.

“He is the epitome of the American dream,” Youssef Mosallam, who attended Fordson with Brian Mosallam, said. “Brian understands the power of community and the power of remembering where one has come from. He understands that this is more important than where you end up.”

Mosallam is a financial advisor for financial planning company AXA-Advisors, LLC, with branch headquarters in Troy; he also is Dearborn Public Schools Education Foundation chairman and member of the Dearborn Centurions, Dearborn Area Chamber of Commerce and other groups.

Mosallam, who grew up in Dearborn and graduated from Michigan State University with a degree in Engineering Arts, is no stranger to the community, said Rudah Saghir, president of the Fordson Alumni Association.

“I’d like to thank you for being a man of action and not just words,” Saghir said to Mosallam. “You are a good role model for our youth and you have always put education first.”

“This win could not have been bestowed on a better candidate,” Elder said before she swore him in. “He loves education, he loves kids and he loves Michigan State. His career in financial advising has only prepared him for the task that makes his win all the more fitting.”

Mossallam said words alone could not express his gratitude for the community’s support.

During his speech, he paused several times, nearly in tears, while the audience cheered him on.

“It is the most humbling experience you can imagine,” Brian Mosallam said, “to have over a thousand emails and text messages of congratulations from all over this country. I am absolutely blown away, but by the grace of God I always felt this day would come. I just did.”

Brian Mosallam said he has prepared for the position for the past 20 years by having a solid foundation at home, educational support from the Dearborn Public School system, and “a village full of role models along the way.”

At the end of his speech, Mosallam said he had so much fun the first time around at MSU, he will go for eight years now instead of four when he was a student.