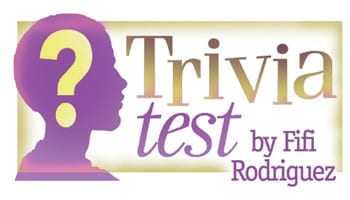 1. ANIMAL KINGDOM: What is a formicary?
2. ASTRONOMY: Which planet has two moons called Titania and Oberon?
3. GAMES: What is the color of St. James Place in the game “Monopoly”?
4. LANGUAGE: What does the Greek word “platypus” mean?
5. MEDICINE: What is a more common name for the condition called odontalgia?
6. GEOGRAPHY: The island nation of Madagascar lies off the coast of which continent?
7. INVENTIONS: Who invented the modern ballpoint pen?
8. MEASUREMENTS: How many gallons are contained in a firkin?
9. MYTHOLOGY: Who was the daughter of King Minos who helped Theseus to escape from the Labyrinth?
10. MOVIES: What was the name of the women’s baseball team in “A League of Their Own”?