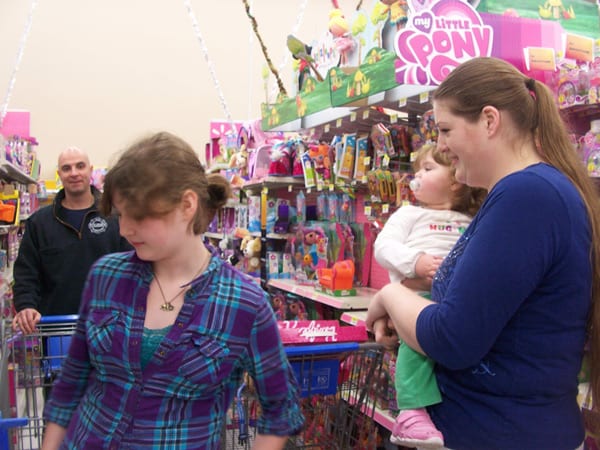 By SHERRI KOLADE
Times-Herald Newspapers
DEARBORN — Nine-year-old Muhammad Naqvi furrowed his eyebrows while looking for the perfect toy before gingerly placing an action figure in his shopping cart on Dec. 22 at Walmart Supercenter, 5851 Mercury Drive.

Naqvi, a third-grader at Geer Park Elementary School, participated, with 39 other Dearborn youth, in the fifth annual Shop with a Cop event at Walmart.

Dearborn police charity organizations have partnered with Walmart, since 2008, to put on the event, which helps needy families have gifts for Christmas.

Dearborn Police Charities donated $2,000 toward the cause and Walmart Supercenter matched the donation; each child received a $100 Walmart shopping card.

Dearborn Police Charities, which started 10 years ago after the death of a police officer, is a non-profit organizational arm for the Dearborn Police Department which raises money to financially assist families during hard times.

Naqvi said he planned to spend the money on action figures and other toys.

“We love to see everyone happy,” Kiraly said. “I think this is a good opportunity to show how we can be and we can show (the children) that we are nice people and we want to help them.”

Dearborn Police Detective Michael Ball said the event is all about the children.

“We want to make sure we help as many families as possible during this time of year,” Ball said. “Whatever we can do to assist these families makes us feel good and helps our community. It benefits the kids the most.”

“This was our biggest turnout this year,” Ball said. “We had more police and fire than we needed, so that was really good for us.”

Dearborn resident Annmarie Zick took her children to shop at the event after hearing about it from her mother, after a Dearborn Public Schools employee referred her family.

“I was beside myself when I found out,” Zick said before her children went shopping. “I am very thankful for the generosity that has been extended to our family. This year it has been kind of hard for us.”

Zick said as a single parent it is not easy raising four children – between 1 and 12 years old – alone.

“I’ve had to take every bit of savings I had set aside for Christmas to pay my house payments and stuff,” she said. “I am so thankful that there are so many people who are willing to help us. It makes me want to be in a better position to help out later on when I am able to.”

While shopping, Zick’s daughter Adrianna Zick picked up toys that squeak, a digital camera, and a few other toys that “look cool.”

“The (toys) can talk and you can create your own stuff,” she said.

Walmart Supercenter Store Manager Karen Robhenhurst said she contacted the Dearborn Police Department in 2008 to start a Shop with a Cop event because other Walmart area stores were involved with the event.

“The biggest thing is the children buying gifts for family members and not taking care of themselves,” Robhenhurst said. “At the end we always make sure the children have a gift that is just for them to make them feel that they are a part of Christmas too.”

Robhenhurst said the event helps everyone out.

“It is fun to be a part of the community and make sure each kid gets something in their stocking every year,” Robhenhurst said.