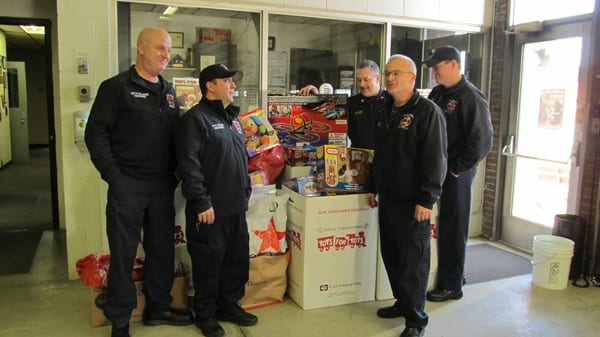 By SUE SUCHYTA
Sunday Times Newspapers
ALLEN PARK – Fire department engineer Ed Cann said he and his fellow firefighters try to avoid the spotlight when they take on projects that help others, like storing and redistributing used durable medical equipment at the fire station on Roosevelt.

“We are not trying to draw attention to ourselves and say ‘Hey, look at us,’” Cann said. “We’re trying to let everybody know that (wheelchairs and smoke detectors) are available here and we’re running out of room for wheelchairs, so come and get them.”

Cann said on Dec. 18 that they had one pediatric and 11 adult wheelchairs, nine walkers, three canes and eight pairs of crutches.

Fire Chief Doug LaFond said the firefighters have been collecting and redistributing equipment longer than the 17 years he has been with the department.

The battery-operated smoke detectors are free to Allen Park senior citizens age 60 and older, and attach to ceilings with screws or two-sided tape.

Cann said the fire department acts as middle-man for durable medical equipment like wheelchairs, walkers, canes and crutches for at least two decades – people donate equipment no longer in use so the firefighters can donate them to others in need.

He said one Allen Park resident and retiree, Dennis Nagy, a retired Detroit Police officer, scours estate sales searching for items for several non-profit groups he helps; he said Nagy, who has a “pay it forward” sticker on his car, often buys and donates equipment finds to the Allen Park fire station.

Cann added that Allen Park residency is not necessary for someone in need to receive the equipment. He said they could donate the surplus to an international relief agency through local United Way, but they would like to see the equipment help people in need locally.

Cann added that they will collect Toys for Tots donations at the fire station, at 6730 Roosevelt, through Jan.1, at which time Toys for Toys will pick up and store any remaining donated toys for next Christmas.

LaFond encourages any families whose children get duplicate Christmas gifts to bring the extra toys to the fire station’s Toys for Tots donation site.

The Allen Park Fire Department is proud to be the largest donation site for “Toys for Tots” Downriver, Cann said, which he attributes to the generosity of Allen Park residents. He said this year one woman donated 50 new basketballs.

Run by the U.S. Marine Corps Reserve, Toys for Tots provides toys to children whose parents cannot afford to buy them holiday gifts.

He said the recent shootings at Sandy Hook Elementary School in Newtown, Conn. might have moved local residents to donate more toys this year.

“If there’s anything good that’s come out of this tragedy in Connecticut, we saw this huge spike in the last couple of days – people are bringing more toys for the kids,” Cann said. “I think some good came out of the bad there.”

In addition to “Toys for Tots,” the Allen Park firefighters union, Local 1410 of the International Association of Fire Fighters, has a charity fund they use to pay for projects year-round, including purchasing gifts for several local families in need identified through Allen Park schools.

“It’s a group effort,” Cann said. “It’s amazing when many individuals come together, what one big group effort can make.”

Even though firefighter headcount has decreased in Allen Park, Cann said the economic forces that cut their resources make the need for their charitable work all the more important.

“People are in even greater need now,” Cann said. “I’ve always believed that when you give you get – whether it is karma or Christianity or just good luck, what it does for us is keeps our spirits up, and so the morale with the guys is elevated when we see kids getting presents for Christmas.”

He said the IAFF also helps sponsor the International Association of Burn Camps, which provides camp opportunities for children with burns.

Although they did not participate in 2012, Cann said the Allen Park firefighters usually help with the annual Muscular Dystrophy Association Labor Day “fill the boot” fundraising drive.

Cann said they teach children many fire safety guidelines, like not playing with matches, keeping power cords away from water and not cooking in the kitchen unless an adult is with them.

“How many fires were prevented I do not know,” Cann said. “I’m sure many.”

LaFond said they visit the Allen Park elementary schools (Arno, Lindemann and Bennie, as well as Cabrini) every year to reinforce fire safety lessons, like “stop, drop and roll,” and how to call 911 in an emergency. He said they also visit several preschools in Allen Park as well.

Cann said he hopes their programs make a difference in people’s lives. “I’m sure many lives have been affected by the prevention side and the charity side,” Cann said. “And it keeps our morale high… that’s very important in times like these.”

LaFond said the firefighters are pleased with the response to their initiatives.

“It’s a great feeling – it really is,” LaFond said. “That’s the kind of stuff that we really like doing – helping the community as much as we can… It is a good tradition, especially in the times we are in right now.”

LaFond added that the department has many unsung heroes. One firefighter lent his own home carbon monoxide detector to a senior citizen after her own alarm malfunctioned, and so she could sleep free from fear that night.

Another time the same firefighter purchased – and installed with the help of other firefighters – a new stove for an elderly couple who were experiencing the symptoms of carbon monoxide exposure from a faulty burner on their old stove.

“These are the kind of guys that work here,” LaFond said. “This is just stuff they do on their own.”