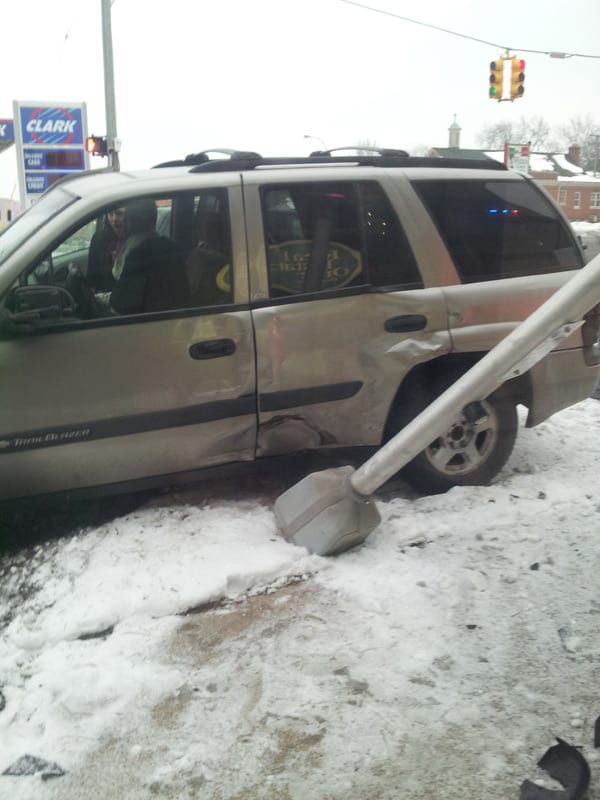 Photo courtesy of Jennifer Olson
A 21-year-old Dearborn Heights woman sits inside her vehicle , near a passenger, after the vehicle hit a nearby street sign that hit a portion of a Real Estate One building Friday on Ford Road at Silvery Lane.

By SHERRI KOLADE
Times-Herald Newspapers
HEIGHTS — Two drivers are in the hospital after a car crash about 4:30 p.m. Thursday on Ford Road at Silvery Lane.

Traffic Division Cpl. Leonard Stewart said a 71-year-old Dearborn man driving a Kia east on Ford made a left turn and crashed into a 21-year-old Dearborn Heights woman’s Chevrolet Trailblazer, heading west. The Trailblazer then hit nearby street signs that hit a portion of the Real Estate One building, 25000 Ford Road.

The drivers, whose names have not been released, are at Oakwood Hospital in Dearborn, Stewart said.

“The (Dearborn man) is in serious condition,” Stewart said. “The (Dearborn Heights woman) was last known to have been getting an X-ray.”

On Dec. 4, Stewart said he is waiting on toxicology results to see if alcohol was a factor.

“We haven’t determined if anyone is at fault,” Stewart said. “(Our) preliminary investigation is that someone ran a red light.”

Real Estate One Assistant Manager Jennifer Olson said she was working at a computer when she “heard the big boom.”

“I turned around and I saw the Trailblazer spinning and then coming directly toward the building,” Olson said. “I actually jumped up thinking they were coming through (the building.) Then for some Godsend, at the last minute the car went back.”

Olson said the Dearborn Heights woman told her that she tried to avoid hitting the building.

“We brought her inside because we saw that she and her friend got out the car,” Olson said. “(The driver’s) wrist was hurt really badly. She just cried the whole time and she kept on holding it.”

Olson said that the other driver was unresponsive.

“We had a couple of people who went to the car who talked to (the driver) and he was never conscious,” Olson said. “I guess (his passenger) was coherent for a minute then she wasn’t. When they both were taken (to the hospital) neither one of them were conscious.”

Witnesses, or anyone with additional information, are asked to call the Dearborn Heights Traffic Bureau at 313-791-9808.