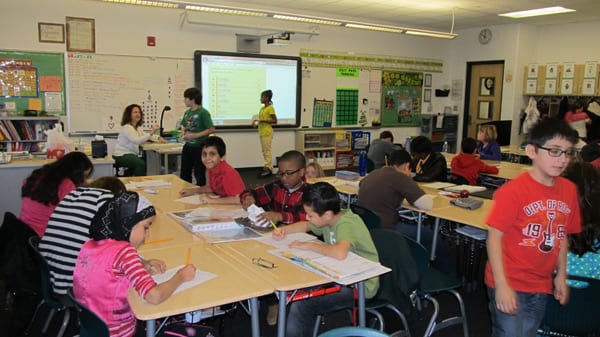 By SUE SUCHYTA
Sunday Times Newspapers
MELVINDALE – Floyd Frandsen, 9, said he has not had much luck with teachers before, but his fourth grade teacher at Allendale Elementary School, Melissa McLaughlin, is the best he has ever had.

“I think it’s awesome how much work and effort she puts into having us learn,” Frandsen said. “She’s so nice.”

McLaughlin said while she hopes her students become lifelong learners, she hopes even more they remain good people who are kind to others.

“Every year it gets more and more challenging… making sure they are ready to learn,” McLaughlin said. “You just try your best to do what you can for those hours they are here with us, and hope that something sticks with them for the rest of their life.”

Vice Principal Maria Podvoyski praised McLaughlin’s research and application of the latest learning technologies for her students, as well as her successful applications for grants for classroom resources.

“Melissa is an outstanding educator,” Podvoyski said. “She keeps education alive in her classroom. Even though the curriculum is packed to the nines and the children are on the go all day long, she makes everything about education. They don’t even know that they’re learning something because they’re having so much fun.”

Podvoyski said McLaughlin uses the latest learning technologies in her classroom in a way that empowers students to take control of their learning.

“They thirst for knowledge,” Podvoyski said. “They are not the type of students who will ask you, ‘Is this going to be on the test?’ or ‘Do we have to do this?’ They are the type who will ask you, ‘What’s next? What else can we do? Can we also do this?’ She expands their minds… and allows them the opportunity to find more.”

McLaughlin’s fourth grade classroom of 32 students is diverse, with students who speak English, Spanish and Arabic at home.

One boy, a recent immigrant from Yemen, joined the class during the first week of December. Students translate for him, and McLaughlin uses an iPad application to translate as well. When he is not working one-on-one with special teachers or tutors, he works with computer software and headphones at a personal workstation in the classroom to learn basic vowel sounds of English letters and simple words.

When working with the rest of the class, McLaughlin uses an iPad connected to an Interactive White Board display, similar in size to and mounted like a chalkboard that lets her project lessons from her computer laptop up onto the screen. She said she is one of seven classrooms at the school with IWB technology. More IWBs will be installed in the school in January.

McLaughlin is in her third year teaching fourth graders at Allendale, and she taught seventh and eighth grade science for eleven years at Melvindale’s Strong Middle School. She said a middle school homeroom class raised funds to buy her iPad, which she uses with an IWB.

McLaughlin said using the IWB is exciting for her and the students. When some students are in band class, she plays an interactive multiplication math game using her iPad and the IWB with the students remaining in the classroom.

“I find sometimes they get so excited, it’s hard to reel them back in,” McLaughlin said. “So I guess if I had one challenge it’s I give them so much to do sometimes it’s like, okay, let’s calm it down and get back into writing mode.”

She said her students have a good time and like to learn.

Husam Sadi, 11, said everything about McLaughlin’s class is better than any class he has been in before, and he likes the interactive lessons using the iPad and IWB for math, science, social studies and reading.

Makyia Whitaker, 10, said McLaughlin is different from any teacher she has had before.

“She cares about the students,” Whitaker said. “She does not just say (to) do something and then goes back to her chair. She explains it to us.”

Xavier Miley, 9, said McLaughlin, unlike some teachers, makes learning fun by letting them use hands-on materials like test tubes to learn science lessons. He said they learned to find the volume of objects placed in graduated cylinders by seeing how much the water rose in them and subtracting it from the water level reading before inserting the object. He said science and math are now his favorite subjects.

“She cares for us,” Miley said. “She cares about our safety… about what we know, and that everyone in this classroom passes.” McLaughlin said she loves it when students enjoy a story she reads to the class and do not want her to stop reading. Some, when they finish their classroom work, will ask if they can read ahead from the classroom collection of a particular story.

She also has a listening center, where students can listen to books on tape that her mother, also a teacher, bought for her classroom. She said many of her students have never seen tapes before.

In addition to using her own materials to the classroom, she and other teachers apply for grants to supplement classroom resources. Another fourth grade teacher at Allendale applied for and received a Medical Academic and Scientific Community Organization Corporation Foundation Field Trip Scholarship that covered the cost for the school’s fourth graders in early December to go to The Henry Ford museum in Dearborn. McLaughlin also applied for and received a $250 Target store grant for school-wide classroom equipment. A DTE Energy contact person provided 390 home energy saving kits for all of the fourth and fifth graders, and McLaughlin said when they returned 80 percent or more of the energy audits, each participating classroom became eligible for a $15 to $100 grant. Last year she said they received a $750 grant from Del Monte, plus fruit and promotional items (like wristbands, pencils and flying disks) for their classroom and fresh fruit coupons for the students’ families. Former students of hers and anonymous donors made it possible for her to get “TIME for Kids” magazine, a division of TIME magazine, which she uses to teach current events to her entire class.

“She’s always on the lookout for new opportunities and grant funding,” Podvoyski said.

Frandsen said the IWB is one of the ways McLaughlin makes her classroom better. He said multiple science experiments make her classroom great as well.

He said she focuses on every student, not just a few.

Lina Qjhdh, 9, said her grade has improved in social studies from a B- in third grade to an A+ in fourth grade.

“Ms. McLaughlin’s so nice. She makes everything fun,” Qjhdh said. “Like when we do an activity, even if it’s hard she helps us and makes it become (more) fun… she’s a really great teacher.”