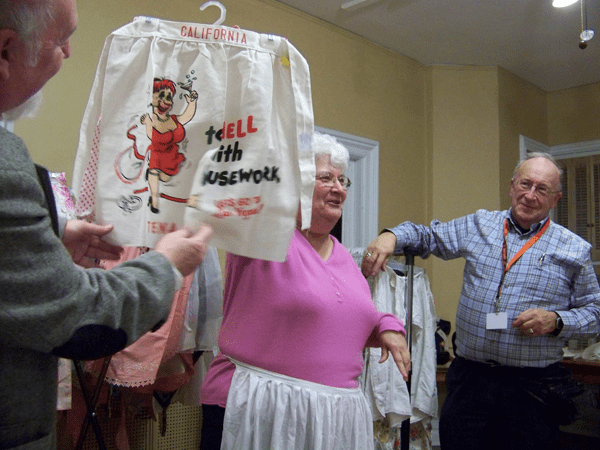 Before they were used to protect clothes from stains and spills, people wore aprons to show hierarchical rank, marital status, or to draw attention to themselves.

Ypsilanti-based speaker Carol Sue Brodbeck explained the purpose and history of aprons to about 50 attendees during a “History of Aprons” lecture Wednesday at McFadden-Ross House, 915 S. Brady St.

She also said aprons were given as gifts.

“When someone was getting married or you were hosting an event, you would get them an apron,” Brodbeck said.

Brodbeck displayed at least 20 aprons, some were sheer and dainty, others were religious and festive. Some were plastic, painted, bejeweled or political.

Brodbeck discussed how some people wore aprons to display their position and possessions.

“Egyptian rulers wore jewel-encrusted and embroidered aprons,” Brodbeck said. “The shape and placement of every jewel meant something and each jewel declared rank.”

Brodbeck, who has amassed a large collection of aprons, entered the business of speaking about aprons by a fluke after someone asked her to give a short speech on them.

“One thing led to another and I got into it,” Brodbeck said. “I’ve been totally hooked since. I am obsessed with them.”

Brodbeck, who buys most of her aprons online, said the opinion of aprons changed over time, especially with the surge of the Women’s Liberation Movement in the 1960s — along with a shift in cultural attitudes.

“Interest in aprons waxed and waned,” Brodbeck said. “Some women mentally tore off their aprons because they didn’t want to be tied to the kitchen. That is where barbecue came in and the men had to start helping in the kitchen.”

“After chickens had eaten the feed, the sacks were washed and my mother would ship them to my grandmother who would make them into aprons and blouses for all the members of my family,” Tate said. “She made about 100 from the 1930s to World War II. It is a very typical apron of that period.”

Brodbeck said buying an apron today is not an easy task because stores can’t seem to keep the shelves stocked because of their popularity.

“I have trouble finding them in stores,” Brodbeck said. “Some girls wear them to prom. The aprons today are sexy and sassy.”

Brodbeck said before aprons became stylish, people used them for functional reasons; many still do today.

“Carpenters, bakers, blacksmiths, dogs and roosters wear them,” Brodbeck said. “This is not a female thing. This was across the board.”

Brodbeck said people put aprons on roosters to protect the birds from clawing their backs and causing an infection.

Women also used aprons as undergarments under their dresses and smaller ones inside their underwear before sanitary napkins were available.

Brodbeck also said the metaphor of “being tied to someone’s apron strings” originally came from English law that stated women belonged to their fathers and when they married they lost their possessions.

“The women were totally, completely dependent on their husbands,” Brodbeck said.

The law changed over time and women who married could keep their belongings; men didn’t have it so easy and they were figuratively tied to their wives or mothers’ apron strings, she said.

“If the husband wanted to live the way he had become accustomed to, he’d better best be good and keep her happy,” Brodbeck said.

Brodbeck said people told the wives and mothers to loosen and cut their apron strings so their husbands and sons could become more independent.

“These aprons bring back a lot of fond memories,” Brodbeck said. “Why cut them and not keep them? Loosen the apron strings, but don’t untie them.”