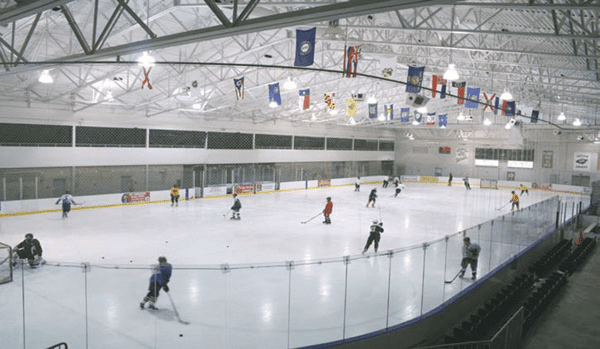 Photo courtesy of the city of Taylor
The hockey season and other schedule activities will continue at Taylor Sportsplex, now under city of Taylor management after JRV Consultants vacated the complex last week. City officials met this weekend to confirm plans for the remainder of the current season, which Mayor Jeffrey Lamarand said will not be interrupted during the transition.

By JAMES MITCHELL
Sunday Times Newspapers
TAYLOR — The departure of management firm JRV Consultants from their interest in the Taylor Sportsplex, 13333 Telegraph, will not result in a “lockout” of hockey players, figure skaters or other athletes who make use of the complex.

Mayor Jeffrey Lamarand said customers and clients will continue using the facility while city employees make plans for the future.

“It’s business as usual,” Lamarand said after JRV vacated the Sportsplex Monday. “We don’t know whether we’ll be in the management business or if we’ll sell it, but the activities will continue.”

Ohio-based JRV began managing the Sportsplex and its hockey, soccer and youth sports programs in 2011. Last year the company, which also manages the Southgate Civic Center Arena and Melvindale Ice Arena and Community Center, negotiated with Taylor officials for purchase of the facility.

The city’s $6 million asking price was undercut by a bank’s evaluation that the complex was worth $4.5 million.

No payment was made, and city officials assumed responsibility for the Sportsplex.

“The city officially took possession Monday,” Lamarand said. “They turned over the keys. We are using some of the (JRV) staff to help with the transition.”

JRV President and CEO Jack Vivian did not respond to requests for comment.

Lamarand said that Golf, Parks and Recreation Director Jeff Dobek will supervise the changeover, and additional employees have been hired. A meeting was scheduled for Saturday for a committee including Dobek, members of the city council and Sportsplex staff to discuss future plans.

For now agreements are in place to maintain the facility and ice rinks through May, the end of the 2012-13 hockey season.

“We have through May and we’re committed to make sure it’s maintained,” Lamarand said.