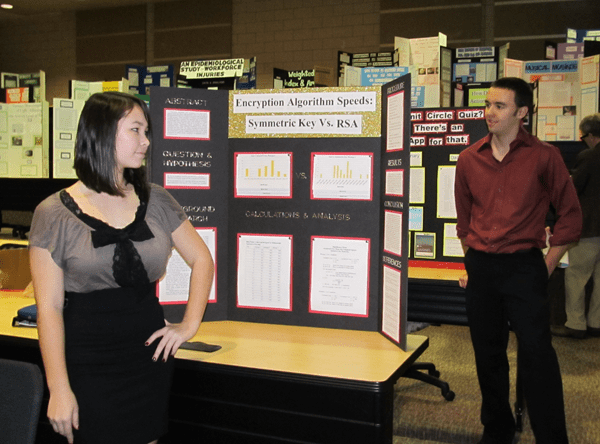 By SUE SUCHYTA
Sunday Times Newspapers
HEIGHTS – When Lucas McIntyre, 17, a senior at the Dearborn Center for Math, Science and Technology, says he “has an app for that,” he is referring to his science fair project.

Using a unit circle, a simple way to learn about the lengths and angles in trigonometry, he created a prototype application to quiz students and help them learn.

“Any type of phone – whether it’s an iPhone, Android, Windows – it can work on anything,” said McIntyre, whose home high school is Edsel Ford in Dearborn. “We haven’t figured out how to put it on phones yet, but I have an emulator here that emulates what it would be like on a phone … and this will be a nice way for students to learn.”

Jeff Whittaker, a research and physics teacher, has seen many science fair projects at DCMST based on original student research.

“The science fair gives students the opportunity to create knowledge,” Whittaker said. “A typical science classroom experience involves learning topics that have been discovered long ago and doing experiments that have known outcomes. Research, which is what we do here, gives the students the opportunity to create knowledge, to be a leader in a sense in the field of science and technology.”

DCMST, founded in 2001, with its first graduating class in 2005, draws up to 25 students a year from each of Dearborn’s three high schools: Dearborn, Edsel Ford and Fordson. Starting in their freshmen year, students take three classes at DCMST – in math, science and technology or research — and then take three classes at their home high school. The district provides buses, and older students have the option of driving themselves. Classes, originally held at Henry Ford Community College, now take place on a campus shared with other Dearborn School District programs at 22586 Ann Arbor Trail in Dearborn Heights.

Whittaker said DCMST students learn basic research and discovery skills while working on science fair projects, and choose topics to explore by taking a personal inventory of their own interests and curiosity in fields like math, science and engineering.

“If they have a natural interest in how things work or in creating devices and taking things apart, they might gravitate towards an engineering topic,” Whittaker said.

While the categories are straightforward and include physics, social science, engineering, mathematics and botany, individual topics are wide-ranging. This year’s science fair topics at DCMST included a self-latching shoe, the addictive properties of sugar, how classical music affects how the brain works to solve puzzles, how training or lack of it impacts teen injuries in the fast food industry, and whether light bulbs can heat up a room better than a space heater.

Zach Brown, 15, a sophomore from DHS, chose the effect of environment on the bacterial decomposition of organic material as his science fair project. He said he discovered that science fair projects take a lot more time to complete than is generally believed, and that it takes a lot of research and work.

Nayef Bazzi, 15, a sophomore from Fordson, also studied decomposition, specifically how the type of soil affects the rate of decomposition of organic matter, using topsoil, sand and clay. He said he found the topic interesting and enjoyed doing the research.

He said he learned, though, that he should have multiple sample sizes to have more statistically significant data in the future.

He said he learned about DCMST from a cousin who went here before him.

“DCMST is amazing,” Bazzi said. “At first I didn’t really like it, but when I came here everyone was like really nice. It’s a great environment and I really recommend it.”

Kristianna Ballnik, 15, a sophomore from DHS, said she found that the teachers at DCMST are supportive, and the school has exceeded her expectations and turned her on more to science.

“You get a better environment here,” Ballnik said. “All the people want to learn, and the teachers are really dedicated to whatever they’re teaching. They love their subjects – it’s a really enlightening experience being at DCMST.”

Ballnik said she became more organized as she studied the effect of duckweed on cleaning up polluted water for her science fair project, and used a probe that the school received as part of a science grant.

Lauren Ebels, 16, a sophomore from DHS, learned how classical music – specifically Mozart – has a positive short-term effect on cognitive ability. She said she attributes her findings to the mathematical properties of music, and how music releases a brain chemical, dopamine, which releases other brain chemicals and improves cognition – it helps people focus on a task.

She said she is glad she experienced a science fair research project, even though it scared her at first.

“It was really fun,” Ebels said. “It was a good experience, and I’m happy that we did it.”

Hesham Ragih, 15, a sophomore from Fordson, who did his project on the effects of concentration on the angle of polarization in chiral (mirror image) molecules, which he said are very common in many chemical reactions, such as with protein molecules, said he likes the environment at DCMST.

Whittaker said about two-thirds of the participating students will meet the eligibility standards to enter their project in the 56th annual Science and Engineering Fair of Metro Detroit held March 12 to 16 at Cobo Center in Detroit.

“I think that this experience is something most kids aren’t lucky enough to get,” Parks said. “I think it’s a really important aspect of improving science education in Michigan … this is one of the ways that we can do that and encourage that – to showcase what our kids are capable of doing and to be there to support them.”

Whittaker said that every year students come up with amazing science fair projects.

“A lot of these projects in here if they were done at a corporate level would result in patents of new technologies,” Whitaker said. “If they were done in a university setting they would probably result in published papers and dissertations. But our focus is on meeting the needs of the high school student … and preparing them for success when they go into that university … or corporate research setting.”

Brown said students at DCMST share an enthusiasm and aptitude for science, and fellow students generally do not consider a science fair project on decomposition, which reflects his interest in Crime Scene Investigation, as weird, as classmates at his home high school might.

“I prefer archeology, (which is) more (about) older dead things than freshly dead things,” Brown said. “But this was about as close as I could get to that.”