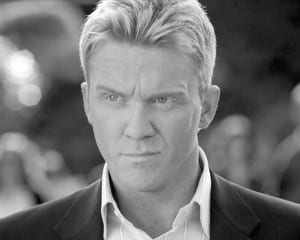 Q: I’ve always really liked Anthony Michael Hall, especially his recent sci-fi series, “Warehouse 13.” However, I do miss seeing him in comedies: His guest-starring turn on “Community” a few seasons back was hilarious. Can you tell me if he’ll be on a comedy soon? — Audrey W., via e-mail

A: When “Awkward” returns to MTV this summer for its super-size third season, Anthony Michael Hall will join the hit series as a teacher at Jenna’s high school. According to those in the know, Anthony will play a sadistic creative-writing teacher who insists on pushing his students beyond their academic limits. Anthony also co-stars in the feature-film comedy, “Sexy Evil Genius,” along with Michelle Trachtenberg, Seth Green and William Baldwin.

Q: While I wasn’t a big fan of the story line Scott Foley had on last season’s “True Blood,” I was excited to see him in my living room again after leaving “Grey’s Anatomy.” What can I see him on next? — Trudy K., via e-mail

A: I agree with you, Trudy. Scott Foley is one of those underrated, underutilized actors who we need to see much more of. So, you can imagine my happiness upon discovering that he is set to guest-star on one of my favorite shows, ABC’s “Scandal.” His character is said to be a part of a major story arc that will play out toward the end of the current season. Creator and head writer Shonda Rhimes was eager to work with Scott again after his run on “Grey’s,” so one show’s loss is another’s gain!

Q: A while back you wrote that “Unforgettable” had belatedly been renewed for a second season; however, I’ve seen neither hide nor hair of it yet. Please tell me that the suits didn’t change their minds again! — Hilary S., Portland, Maine

A: Don’t worry, Hilary, the Poppy Montgomery-starring police procedural will indeed have its second season on CBS. And we now have a premiere date, which is Sunday, July 28 at 9/8c. As I reported previously, season two will comprise 13 episodes, with Dylan Walsh, Jane Curtin and most other cast members returning.

Readers: A few months ago, I was disheartened to report that AMC had decided not to renew “The Killing” for a third season. In another rare reversal — along the lines of CBS’s renewal of “Unforgettable” — AMC recently announced that the crime drama WILL be back for a third season.

Season three takes place a year after the Rosie Larson case was solved, as Stephen Holder (Joel Kinnaman) searches for a runaway girl and uncovers a string of murders connected to Sarah Linden’s (Mireille Enos) previous murder investigation. Linden, no longer a detective, must return to both a career and a case she had put behind her.

All this renewal reversal has given me new hope for ABC’s “GCB” to return, whether with ABC or another network. Let’s make this happen —TNT, I’m lookin’ at you!