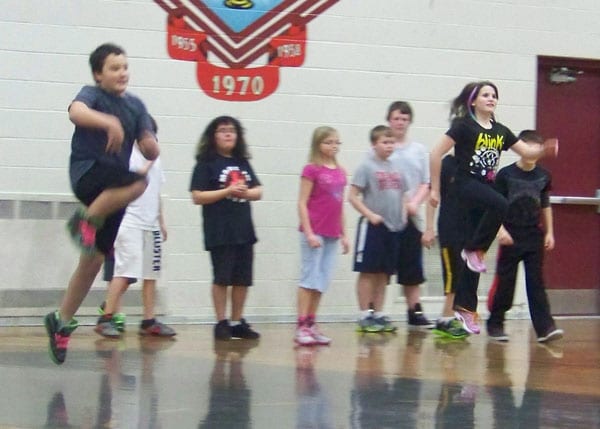 A spirited afternoon of Winter Fitness Fun was held in the gymnasium of Gerisch Middle School last week. The after-school activity was designed to promote activity and physical fitness. Instructor Sam Childes guided the students through exercise and a rowdy round of dodge ball.

SOUTHGATE — Gerisch Middle School principal Eric Carlson won’t be surprised if the anticipated announcement is heard that the school will close at the end of the year.

Time for reflection will be later, Carlson said, as there will be plenty of work to be done if Gerisch is hosting its final semeseter.

“It’s pretty well a given” that it will close, he said. “The district is shrinking, it’s been shrinking. There’s always been talk of closing this building.”

Opinions vary on the decision, but administrators acknowledge the fact that a district cannot afford to operate buildings with vacant classrooms. The economic weight of not closing it would be too much for the current coffers to support.

The board of education is scheduled to meet Tuesday and vote on the district’s reconfiguration plan for the 2012-13 academic year. On the table are the closures of Gerisch and Chormann and North Pointe elementary schools.

The drastic steps may be long overdue as Southgate faced declining student enrollment in recent years. The current roster includes approximately 4,250 students, down from peak populations of more than 5,000 enrolled in the district’s buildings.

Making the decisions this year was no longer an option after Supt. William Grusecki and administrators realized that an anticipated budget deficit of $750,000 was, in reality, in excess of $3 million.

In December the board began a series of meetings with parents, teachers and administrators and presented plans to shutter three buildings. All sixth- through eighth-grade students will attend Davidson Middle School, and all ninth- through 12th-grade students at Anderson High School.

It’s an adjustment from a time when the district included two high schools and two middle schools, the boom years after the 1970 reorganization that streamlined Southgate and Heintzen districts into one.

The closures will address about half of the anticipated deficit, and inevitably result in some layoffs. An expected 26 teacher positions will be eliminated along with four administrators under the plan.

Carlson said he was unaware last week of any

specifics and will — along with parents, teachers and administrators — await the final decisions this week. If the plan moves through as expected, Carlson said there won’t be time for nostalgia or reflection just yet, with hundreds of details needing attention between now and the end of the school year and an anticipated flurry of parent questions.

Archives, equipment, computers, books and other tools of the education trade will need a new home along with students and staff.

Grusecki said the district’s frequent meetings and website (www.southgateschools.com) have and will continue to address inquiries: Who will go to which schools, schedule changes and more.