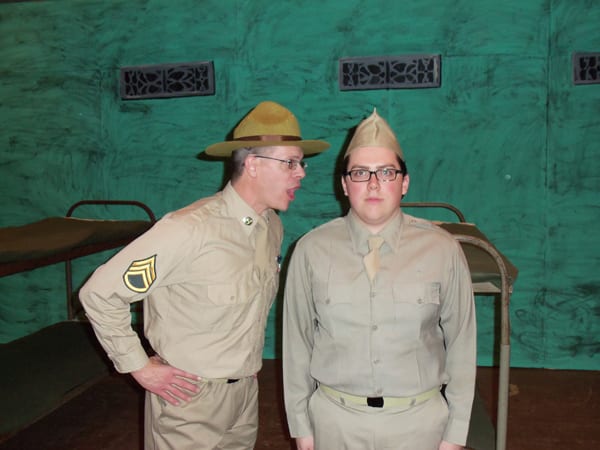 Directed by Chris Rollet of Southgate, “Biloxi Blues” is the second play in the trilogy based loosely on Neil Simon’s life, which finds Eugene Jerome in Biloxi, Mississippi for World War II-era Army basic training.

Rollet, who also will direct SCP’s upcoming production of the musical “Chicago,” inherited the “Biloxi Blues” role when the original director had to drop out because of job demands.

Taylor resident Daniel Bartrum, 23, also has been in a Neil Simon show before, and is reprising the role of Eugene Jerome, which he played for SCP last year in “Brighton Beach Memoirs,” which is part one of the trilogy.

He said the character of Eugene has matured from the awkward teen of the first play.

“Everyone kept telling me this is a different Eugene,” Bartrum said. “It’s really kind of hard to move on from the kid Eugene to what is now the teenage, semi adult Eugene. It took a little bit, but I think we’re getting there.”

In another interesting twist, Bartrum’s girlfriend is playing Rowena, the prostitute with whom Eugene seeks to lose his virginity.

“I really wasn’t prepared for that at the beginning, but I think it makes that scene a lot easier to perform,” Bartrum said. “I think it would have been awkward with someone I wasn’t comfortable with, but it being my girlfriend it works out quite well.”

Allen Park resident Alexis Mosley, 22, who plays Rowena, did not audition for the role. She was asked to play the part when the actress cast decided she wasn’t comfortable with the role.

“It’s very funny for us, but we’ve got to work through and get all the giggles out before show time,” Mosley said.

She said she plans to work some costume, hair and makeup stage magic to add glamour to her appearance for the role, which is the most risqué she has ever played.

“It’s kind of fun,” Mosley said. “It’s only about five minutes long, so I can kind of come and go as I please. If I have work or rehearsal it’s very accommodating.”

She said her friends are excited for her because the role is such a stretch for her.

“It will be interesting if people haven’t seen me on stage before if this is the first part they see me in,” Mosley said.

Playing a role at the opposite end of the spectrum is Allen Park resident Kathy Krantz, 17, who plays Daisy, an innocent Catholic school girl Eugene meets at a heavily chaperoned dance.

She is telling friends to come see the show for its humor.

“People my age love to laugh, and this show is perfect,” Frantz said. “It’s hilarious. We have really good people that play all the characters, so all the jokes are like spot on.”

Wyandotte resident Patrick Reed, 26, who plays Arnold Epstein, plays a much less innocent character, one who is argumentative and non-conformist who also experiences religious prejudice during basic training. He said the role is one of the largest he has performed with the group.

“I have to do a large range of emotions and more of a range of things than I have done before,” Reed said.

Woodhaven resident Chris Gawel, 29, who plays Roy Seldridge, said he tells people that “Biloxi Blues” shows what World War II draftees faced and some of what they experienced once they got into the military.

Lincoln Park resident Jeff Klug, 41, who plays Sgt. Toomey, said playing the part has been a challenge because it is his first significant stage role. He said he had a job in the past where he gave orders to people, but in the food service industry instead of the military.

“I am having fun (with Toomey), and I like being in charge,” Klug said.

He said his wife and five children, who all do community theater, drew him in to the experience.

“Usually I am the guy behind the scenes, but now I am onstage,” Klug said.

The Dearborn Area Theatre Association encourages local thespians to submit nominations for induction into the Dearborn Theatre Hall of Fame.

Nomination recognizes residents who have been active in Dearborn and Dearborn Heights area theaters for at least 20 years. The Hall of Fame Award, begun in 1990, will celebrate its 23 years of recognizing residents.

Nomination letters should detail the specific service and include examples of the work and positions held by the nominees.

Nominations must be postmarked by April 1 and sent to: DATA Hall of Fame Committee, 6701 Henry Ruff Road, Garden City, MI, 48135.

A testament to the transformational power of storytelling, Scheherezade mesmerizes King Shahryar and delays her own death by leaving him eagerly awaiting a new story each night so he’ll let her live.

The play contains mature content. For tickets, call 313-577-2960, and go to www.Bonstelle.com for more information.