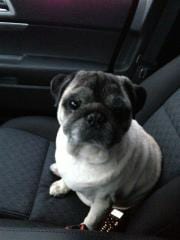 DEARBORN– A 6-year-old Pug named Gus was returned safely to his owner a day after someone allegedly stole him Jan. 30 from the area near Dudley and Dartmouth streets.

The pug’s owner was home when he reportedly saw someone take Gus from the backyard and flee into a vehicle.

Police responded to the scene and conducted a preliminary investigation. Dearborn Surveillance Unit officers allegedly located Gus at a house in southwest Detroit the next day.

Gus was reunited with his owner who said he was elated to have him back.

The investigation is ongoing and possible charges are forthcoming against the alleged dognapper.