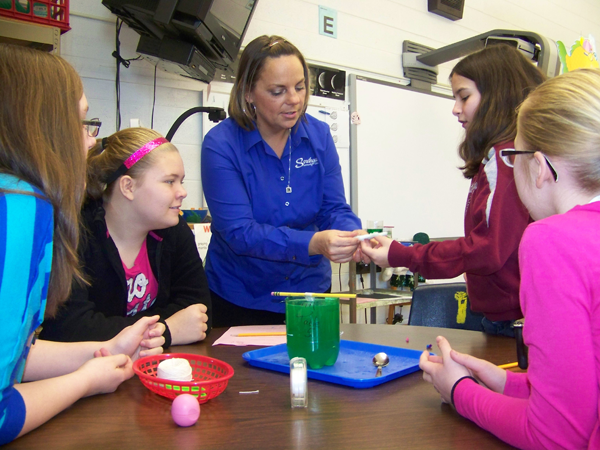 School gearing down
Photo by James Mitchell
Chormann Elementary School Principal Andrea Schiappacasse (center) examines a science project from student Riley Angileri while students Avery Veenstra (left) and Alyssa Lipinski look on. Schiappacasse was at last week’s school board meeting that confirmed that this will be the final year for the school.

By JAMES MITCHELL
Sunday Times Newspapers
SOUTHGATE — The decision was difficult, but easy to make given the situation.

“It was evident that we’d be one of them,” Chormann Elementary Principal Andrea Schiappacasse said of the official announcement that the school would close. “But it wasn’t an easy thing to do.”

Schiappacasse was an active participant in the decision, and sat on the reconfiguration committee formed last year when the district realized the pending $3 million-plus deficit could no longer be balanced by cutting services. Last year the district eliminated general education busing, privatized janitorial service, closed the pool at Anderson High School in an attempt to avoid mass layoffs or closing facilities.

Not long after Superintendent William Grusecki took over in June the expected $750,000 shortfall was revealed as four times that amount, and trimming alone wouldn’t resolve it.

Since then several information sessions have been held to inform parents, teachers and administrators of the proposed plan that was approved Tuesday. Under the restructuring, the district will close Gerisch Middle School and Chormann and North Pointe elementary schools at the end of this academic year. All sixth- through eighth-grade students will attend Davidson Middle School, and all ninth- through 12th-grade students will go to Anderson High School. Last week’s confirmation of the school closings included the news of an expected 30 teacher and administrator layoffs.

Chormann, Schiappacasse said, was an easy — if personally difficult — choice. Built in the mid-1950s on former farm land, the building housed at times community education, recreation activities and meeting space before reopening as a Southgate school in 2000.

At the time only three classrooms were in use, with one added each year to its current level of a dozen active kindergarten-through-fifth grade classes. Chormann was not included in the district’s bond 11 years ago to upgrade facilities, which Schiappacasse said left the building vulnerable.

“Improvements were not made here, we were unable to do the upkeep,” Schiappacasse said. “It would need lots of renovations.”

Schiappacasse said that closing the school for practical decisions, in the same tradition as the recognition that a swimming pool was a lower priority than jobs and education, was easier to accept than if the decision had been made for other reasons.

“It wasn’t based on tests scores, or building climate or perception date,” Schiappacasse said. “We know this will hurt, yet we know this is necessary for the good of the district.”

Closing the building will be a sad day, she said, but Instead teachers and staff are are encouraging the students to celebrate their time in the building rather than mourn its loss.

“Every student feels like this is their home,” Schiappacasse said. As the months creep by plans will be made for activities, ceremonies and the end-of-year carnival that Schiappacasse said will be “a big blowout.”

Saying goodbye will be hard for the 300 students at Chormann, a population within the district’s approximately 4,250 students that reflect a steady decline since its peak of more than 5,000. Schiappacasse said the ending will include the best possible scenario for departing students.

“When they walk out of Chormann on that last day,” Schiappacasse said, “they’ll know that they were loved here.”